Warning: Creating default object from empty value in /home/jimstant/public_html/fetchmyflyingmonkeys/wp-content/themes/platformpro/admin/class.options.metapanel.php on line 49
 Decisive Moment #32. | Fetch My Flying Monkeys
Everyone needs a fleet of flying monkeys to rip the stuffing out of the annoying people in their lives
— Laura
Mmmmm bacon. This happened before Christmas but I wasn’t really blogging then so I’m going to tell you now.

When I was a small child my mother had a friend named Lee. I can’t quite remember if Lee was a stewardess (this was back before they called them flight attendants) or if she had previously been a stewardess. Hell, she may not have been a stewardess at all. All I am sure about is that I thought Lee was absolutely fabulous. I remember just sitting and watching her, with her dark shiny hair up in a French twist or falling perfectly down her back, wearing red lipstick that seemed to never smear or smudge, her perfectly manicured fingers wrapped around a cigarette being held in a fancy cigarette holder (how exotic was that!).  She was tall and thin and in my child’s mind’s eye, she was just perfect. She was always talking about the different places she had visited or had just come back from. In hushed tones I’d hear her talking about her boyfriends to my mother. I would strain to listen, but sadly, never caught any of the really good details. When we’d go visit Lee, her house was perfection. Modern and immaculate with the first in-ground pool I had ever seen someone have that wasn’t in a park or a gym or at a recreation center. She drove a convertible two-seater sports car, of course, and the few times I remember having the privilege of riding with her, I’d just sit in the passenger seat, staring over at her in complete awe. She was my idol.

Now this story takes place when I was still very young. It was a week or two before Christmas, the only time my mom had parties to entertain a few of her friends at our house. My brothers and I were banned to the den or our rooms while the adults were in the living room and kitchen and partied. And even though I wanted, nay, needed to be in there with the adults so badly I could feel it in every fiber of my being, I didn’t dare go. It would had been child-suicide to even attempt to crash one of those parties. That’s what mom told us anyway.

On this particular night, I remember I was sitting on the floor, in my pink pajamas, cross-legged in front of the television. My three brothers were probably in their rooms, I don’t know, all I know is none of them was in the den with me. I had a large bowl of chocolate ice cream in my lap, a treat reserved for occasions when my mother wanted us to shut the fuck up because she wanted us distracted and occupied elsewhere (ie. The Party). I remember distinctly “The Nutcracker” being on the television. I was trying my best to stir my ice cream in the bowl on my lap so it’d turn into a gooey soup of goodness while I watched in wonder at the beautiful ladies up on the tips of their toes twirling about. Suddenly the door to the den opened and I looked up and saw Lee entering the room. She held a small glass of an amber liquid in one hand and a smoking cigarette in a long holder in the other. And even though her walk seemed a little off to me, her hair and makeup were perfect as usual and she was wearing a sparkling dress like the women I had only seen in magazines wear! I took my eyes off the perfect dancing ladies in tutus to watch my perfect idol in her shiny dress. She walked over and stood near me. I saw her focusing her eyes on the television and she said “What are you watching, kid? Ballet?” I looked up and said “Yes, Miss Lee.” because that’s how you properly address your adult idol. I then enthusiastically added “I’m going to be a ballerina one day!” and at that second I knew I really wanted to be a ballerina too. She chuckled, looked down at me, made a ‘tsk’ sound while shaking her head and said “Well that’s not going to ever happen. Ballerinas are thin AND they don’t eat ice cream.” With that she turned and was gone in a flash back to the party, not even caring about the wounded, deflated child left bobbing behind in her soul-crushing wake. I sat in front of the television staring down at the half-melted bowl of ice cream and then back up at the television before me.

And that’s the precise moment I knew. I knew what life held for me. It held ice cream, that’s what it held. Delicious, sweet, creamy ice cream. Because FUCK BEING A BALLERINA WHEN YOU CAN HAVE ICE CREAM!

Now here’s a rendering I made for y’all of that decisive moment in my childhood: 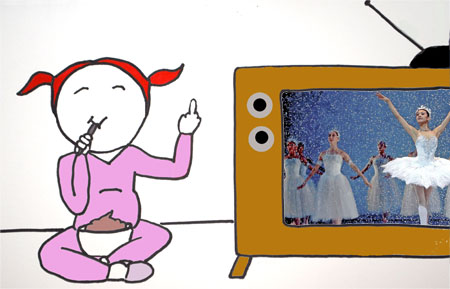