Warning: Creating default object from empty value in /home/jimstant/public_html/fetchmyflyingmonkeys/wp-content/themes/platformpro/admin/class.options.metapanel.php on line 49
 At this rate I will have to join the Polar Bear Club in order to enjoy my pool this year. | Fetch My Flying Monkeys
Everyone needs a fleet of flying monkeys to rip the stuffing out of the annoying people in their lives
— Laura
No time…there’s turtles to be saved. Inflation.

At this rate I will have to join the Polar Bear Club in order to enjoy my pool this year.

Yeah, I know I promised pool cleaning photos and yeah, I know you expected them days and days ago. But if you’ve been reading this blog for even a little while, you’ve realized by now that it’s full of empty promises and disappointment. And while I’m now delivering on my promise of photos, the disappointing thing is, for me anyway, that the pool is still not completed because once it was emptied and power-washed, they determined that it needs resurfacing, which the guy couldn’t do (d’er!) and the guy who can do it can’t do it for 3-4 weeks and a gunite pool, which this is, cannot sit without water in it because that motherfucker will come right out of the ground and ascend into heaven. Amen. All of this I found out as it unfolded because the company I hired to take care of all this was all “Umm, I don’t know ’nothing ’bout no gunite pool” after taking the job. See, mostly they just dig holes and put in those fiberglass pool forms, which I refer to as Human Koi Ponds.

Also, another disappointing thing is there are no photos of the alligator snapping turtle because he was scooped up in a shovel of muck, placed into a large plastic container, and whisked away to the swamp where he can enjoy the rest of his life. So at least someone got a happy ending, I mean, unless a gator eats him. 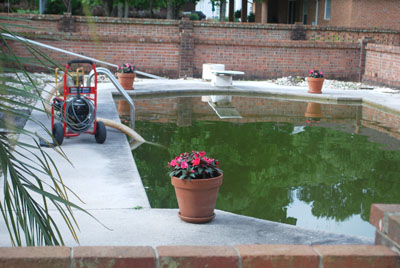 Here's where they started pumping the "Cement Pond." 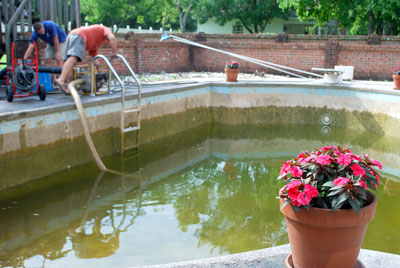 The line kept clogging up with hunks of gunk. Sadly, none of it was dead hooker parts. 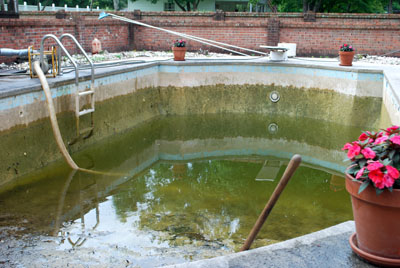 As the bottom became visible I could see the look of "Oh shit, I should have quoted way more" on the guy's face. 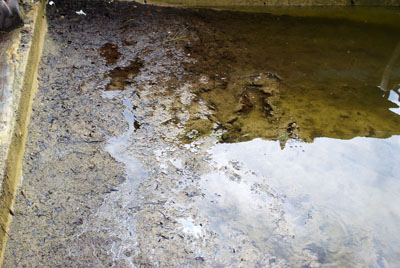 Here, let me show you the bottom. It's mineral rich silt, but it looked and smelled like Satan's colostomy bag. 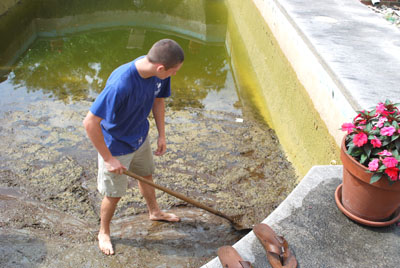 I think this kid got dysentery and died later that night. 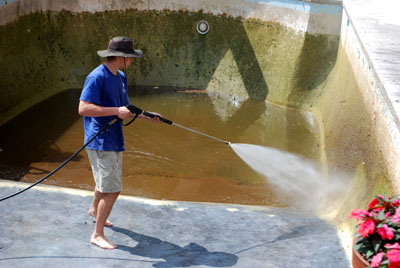 But at least he got the power-spraying done first.

Ahhh, emptied with most of Satan's shit cleaned out. 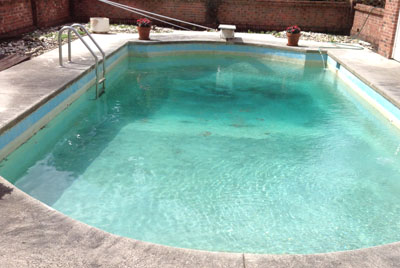 Here it is being filled again so it won't pop out of the ground so that it can be emptied again and resurfaced and filled again. I'm dizzy... 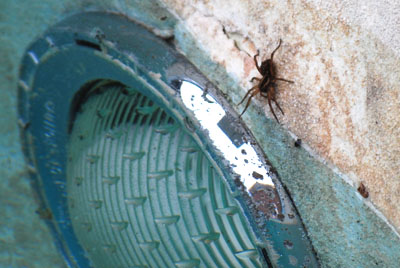 Oh, and here is the GINORMOUS spider I saw taking a drink of water as the pool was being filled. He was all "Bitch, 'bout time you got me some decent drinking water instead of that nasty shit." J then stopped me from filling the pool with gasoline and setting it on fire.

56 Responses to At this rate I will have to join the Polar Bear Club in order to enjoy my pool this year.