Warning: Creating default object from empty value in /home/jimstant/public_html/fetchmyflyingmonkeys/wp-content/themes/platformpro/admin/class.options.metapanel.php on line 49
 Who you gonna call? | Fetch My Flying Monkeys
Everyone needs a fleet of flying monkeys to rip the stuffing out of the annoying people in their lives
— Laura
Boo! Yes, I’m still around and here’s another shitty phone video of my dog Jack. You’re welcome.

Who you gonna call?

Anyway, Wednesday night my friend and I met the “team”- which consisted of four people- downtown. We followed them to an area outside the city near the Congaree River. What this area used to be noted for years ago was Klan activity. That’s right, the Ku Klux Klan. And then way before that during the Civil War, General Sherman went directly through there when he marched on Columbia to burn it down on his way to Atlanta. Then he was overcome by our ungodly heat and humidity and giant, disgusting Palmetto Bugs and said, “Fuck this shit, let them have it. I’m outta here.” Well okay, he burned a few buildings before getting totally bored and moving on. And yes, I am a Civil War history scientist.

So we were in the “area of an abnormal amount of paranormal activity.” It was a clear, crisp night, no fog or anything and they pulled out a shitload of equipment and told us what it was, with most of the names ending in the word “meter” or “sensor.” Sorry, I didn’t take notes. I was too busy watching out for the white hoods and burning crosses at that point. The first thing I did note was that these people were serious about this. And I mean serious. When the head guy said “You can take pictures, talk, whatever. All we ask is that you don’t call out any demon’s names.” I looked at my friend and raised my hand. He nodded his head at me and I said “Do we get a list of what those names are? I don’t want to accidentally call one. ‘Cause you know, sometimes I’ll say something like “You’re a dick!” Dick isn’t one is it?” And in a flat tone he said “No, Dick isn’t a demon name.” “Phew, that’s good.” And then I got visually smacked down and decided to gag my inner smartassness for a while and just watch and learn.

And boy am I glad I did. Listen, I’m not saying I believe in ghosts or spirits, I seriously don’t know what I believe because I have seen a few very strange, unexplained things in my life. But I watched, and listened, and helped run equipment and I thoroughly enjoyed the ride. It was fun as hell. And kind of spooky. Two times in the evening the meter I was holding went wild and I pointed my camera and snapped at the nothingness. And out of all of the pictures I took that evening, the two I took when my meter went off are the only ones that show “something.” And all I can tell you is I swear on my love for my pets that there was no fog and these are not photoshopped at all: 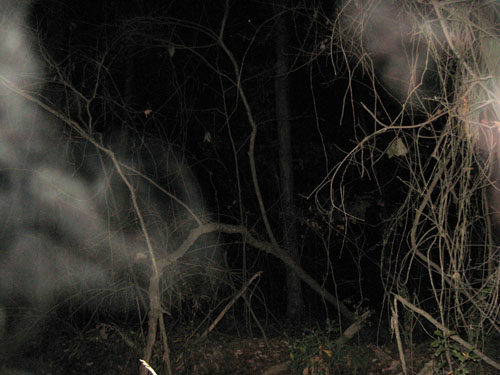 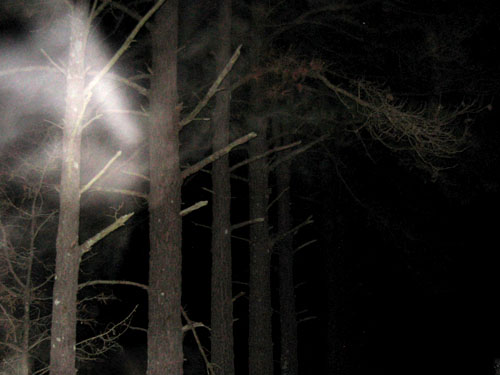 Now excuse me while I go google “demon names.”

88 Responses to Who you gonna call?