Warning: Creating default object from empty value in /home/jimstant/public_html/fetchmyflyingmonkeys/wp-content/themes/platformpro/admin/class.options.metapanel.php on line 49
 A Day at the Races: A Story of Murder and the Cover-Up That Followed. | Fetch My Flying Monkeys
Everyone needs a fleet of flying monkeys to rip the stuffing out of the annoying people in their lives
— Laura
Being an assassin is very hard on your nails, that’s why I’m thinking of changing careers. If I had been texting I probably would be dead right now and typing this from my throne in Hades. I hope they have Wi-Fi there.

A Day at the Races: A Story of Murder and the Cover-Up That Followed.

When I was a little kid growing up in Cincinnati, our house was always full of a variety of exotic pets. Besides cats, dogs, rabbits, and birds, we had loads of reptiles. We had lizards of all sizes and sorts, turtles, even baby alligators, that my crazy-ass papaw would bring us or we would catch. You may remember the time he tried to kill me by giving me a venomous Gila Monster.  Anyway, my mother loved animals and although the vast collection of lizards and exotics were considered our pets, when we were very young we were not allowed to handle them unless she was present because kids are careless, accident-prone, and most of all, stupid. With that being said, this story takes place on one of the rare occasions my mother went to visit a neighbor or something and left us all under the supervision of my oldest brother, Blaine. Quite frankly, we would have been better off being left in the care of a pack of starving, rabid, feral dogs than with Blaine.

On this particular day, having hit the mother-lode on Horned Toad Lizards, with each of us having one a piece, Blaine decided that we should have a Horned Toad Race. He decided that each of us should crack our banks and throw a few dollars in the pot, with the owner of the winning lizard claiming the Grand Prize. We were all down for a little action, and after busting my bank open with a hammer I illegally borrowed from the “off-limits” utility drawer, I threw my crumbled dollars and change onto the pile and ran to get my lizard “Arthur.”

Lining my lizard up at the starting gate, which was at the edge where the rug ended and the hardwood floor began, and facing the finishing line, which was where the kitchen tile started, I sat on my knees and leaned forward whispering motivational strategies to Arthur. “Run fast, Arthur. Don’t look back, just RUN. You can do it, Arthur.” I wanted that money bad.

With us all sitting in a line, holding our lizards, Blaine declared “ON THREE! One, two, THREE!” We all let our lizards loose. Arthur just sat there staring off like he was on sedatives.  I looked at my brother’s lizards and they were pretty much doing the same. I started screaming “RUN ARTHUR!” He just kind of looked around and half closed his eyes. I kept screaming. Suddenly, I heard a loud clap and I looked over and Blaine was slapping the floor beside his lizard and it was moving! ”Oh, YEAH, okay” I thought and I started doing the same and Arthur’s eyes flew open and he waddled a bit toward the kitchen. “YES! C’mon you sonsabitch!” I kept slapping the floor. Then to my right, my brother Daniel started slapping the floor beside his lizard and it yawned and scuttled a few steps. About this time I heard my brother Matt on my left let out a squeal as he was being left behind, and in his excitement he leapt to his feet and started slapping his foot beside his lizard. I started to shout a warning when the worst case scenario happened before my eyes. Matt’s lizard darted just as he brought his foot down hard. I gasped and sat down, forgetting all about the race. Daniel stopped and stared. Blaine kept going, slapping all the while beside his lizard, herding him toward the finishing line.

I looked at Matt and he was frozen with his foot still on his lizard. In shock probably. I lunged towards him and quite literally, tossed him off of the reptile. He fell back and just lay there. I looked down at the smashed lizard and saw that he was still alive, except his guts were on the outside of one side. Matt peeked at it and started crying. Daniel grabbed his lizard up and quickly put him back in the aquarium and ran upstairs. Blaine declared his lizard the winner, grabbed the prize money as he tossed his lizard in the tank and ran for the stairs. I just sat there petting Arthur, staring at the inside-out lizard and listening to my brother Matt’s crying. “I gotta do sumpin’” I thought and I got up and put Arthur away and went back to the ”off-limits” utility drawer and dug through it until I found what I was after. I had a plan. 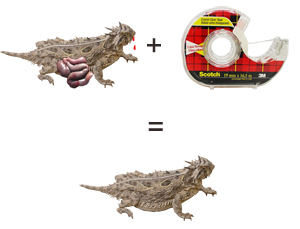 That’s right, Scotch tape. I told Matt not to worry that not only would his lizard be okay, but mom would never have to know. I pushed that lizard’s guts back in the best I could and I started winding scotch tape around him, the whole roll. Then I placed him back in his tank and started cleaning up all the evidence left splattered on the floor. Then we waited.

As soon as mom walked in the house I’m pretty sure she knew something was up. Things were just too quiet. I saw her walking slowly around the downstairs, looking for something broken. Matt and I sat in the living room. I stared at him with my eyes wide open, telepathically screaming “PLAY IT COOL, PLAY IT COOL.” Then it happened, she headed toward the lizard’s aquariums. NOOOOOOO! Matt started crying and blubbering “I didn’t mean to kill it, mommy! LAURA TAPED IT!” Sonsabitch! Her head whipped around to me. I started crying, “BLAINE TOLD US TO BREAK OUR PIGGY BANKS! HE TOOK OUR MONEY MOMMY!” Blaine came running down the stairs “IT WAS DANIEL’S IDEA TO RACE THE LIZARDS!” Daniel was running behind Blaine “LIAR! YOU SAID YOU’D SHARE THE MONEY!”

That was the last time Blaine was put in charge. It was also the last lizard race held in the Ledford house. And Matt, well Matt went on to become an Airborne Ranger and later a fire-jumper, but to this day he can’t even bear to watch the Kentucky Derby.

81 Responses to A Day at the Races: A Story of Murder and the Cover-Up That Followed.