Warning: Creating default object from empty value in /home/jimstant/public_html/fetchmyflyingmonkeys/wp-content/themes/platformpro/admin/class.options.metapanel.php on line 49
 In Memory of Ed. | Fetch My Flying Monkeys
Everyone needs a fleet of flying monkeys to rip the stuffing out of the annoying people in their lives
— Laura
This is why the cats can’t have nice things. He’s a little bit country and I’m a little bit WHORE.

In Memory of Ed.

While driving home from work yesterday a poor little squirrel made the decision to cross the street just as my car came barreling down the road. When I saw him, I held my breath hoping he had the good sense to hunker down. But he was a squirrel with poor decision skills, so I heard the crunch under my right front tire even over the radio. His name was Ed, because he deserves a name, and I prayed him into Heaven, even though I’m kind of thinking it might have been suicide, and the Church would frown on that, but then again the Church frowns on roadkill going to Heaven to begin with, so to Hell with them – the Church, not the roadkill. Anyway, now I’m going to write Ed’s eulogy poem before a bolt of lightning comes down and smites the fuck out of me.

It’s a nice spring for squirrels, but not for dear, sweet Ed.
Most go foraging for nuts, but Ed just ended up dead.
Smashed by a Toyota, struck down in his prime.
Now he’s part of the highway, head flatter than a dime.

I hope you didn’t leave a family, some kids perhaps or maybe just a wife.
Either way you really shouldn’t have been so careless with your life.
I’ll never forget the sound you made Ed, I heard it even over Adele.
And I hope it wasn’t suicide ’cause you might go straight to Hell.

Rest in peace, little dude. Your troubles are over. And if it wasn’t suicide, I’m sorry I murdered you with my car. 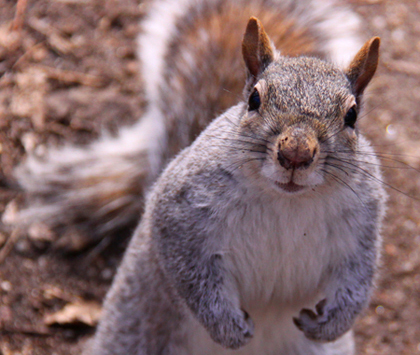 89 Responses to In Memory of Ed.