Warning: Creating default object from empty value in /home/jimstant/public_html/fetchmyflyingmonkeys/wp-content/themes/platformpro/admin/class.options.metapanel.php on line 49
 When you are driving a post-apocalyptic vehicle it’s good to practice post-apocalyptic maneuvers. | Fetch My Flying Monkeys
Everyone needs a fleet of flying monkeys to rip the stuffing out of the annoying people in their lives
— Laura
It’s just like Field of Dreams except there’s no cornfield and they all wear shoes and they’re not dead. Jack got to celebrate his birthday early this year. 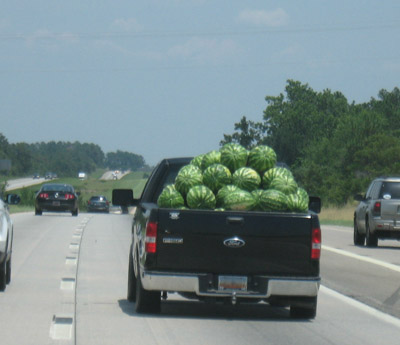 In my mind's eye, these watermelons were alien pods, or zombie babies, or IEDs of sweet, delicious horror, or I just pictured the faces of the Bunch O' Bitches on each. One of those things anyway.

When I saw the truck above on the highway, I could not refrain from getting behind it. Maybe it’s because I like to live life dangerously, or maybe it was because I was driving J’s Hummer. (Shhh.) I followed it for several miles, waiting for watermelons to fall. Under my breath I was mumbling “C’mon. C’mon, drop you motherfuckers! DROP!” I could not wait to hear the splat of watermelons on the grill of the monstrosity I was driving. Soon we came upon an area of the highway where I knew there was a dip and I quickly turned off the radio, tightened my grip on the steering wheel, and prepared for melon carnage. I was smiling, anticipating the Gallagher-ish slaughter that was about to unfold in five…four…three…two…one.

The dip came and went and not one watermelon tumbled. NOT. ONE. What the hell? Surely this farmer was a warlock and cast some kind of sorcery spell on his melons! I decided to switch lanes. Just as I did, I looked over at the Magical Melon Truck and saw TWO MELONS fall! *SPLAT* * SPLAT* “FUCK! I”M MISSING IT!” I screamed to no one. I eased off the gas so I could slip in behind him again but he was exiting the highway! “NO! NO!” I stuck my lower lip out and fake cried. Then I turned the radio back on and Adele’s Rolling In The Deep was playing for the five hundredth time that day and I sang along with it for the five hundredth time that day.