Warning: Creating default object from empty value in /home/jimstant/public_html/fetchmyflyingmonkeys/wp-content/themes/platformpro/admin/class.options.metapanel.php on line 49
 Chewed up skeletons in the closet. | Fetch My Flying Monkeys
Everyone needs a fleet of flying monkeys to rip the stuffing out of the annoying people in their lives
— Laura
Nothing is sweeter than knowing a three-day holiday weekend is coming, well, except winning the lottery because then every day is a three-day holiday with sprinkles on top. It’s just like Field of Dreams except there’s no cornfield and they all wear shoes and they’re not dead.

Chewed up skeletons in the closet.

I’m not big on blogging private matters. Hell, I’m not big on talking about private matters. I’m a big believer in secrets and holding things in until you think you’re going crazy and instead of discussing them with your friends and family, you just keep on burying them like dead hookers, sometimes even drowning them with pills and booze. And just because a person blogs doesn’t mean they owe anybody the truth. But I’m about to tell y’all something I’ve been keeping from you. I know at first you’re going to be shocked, then maybe disappointed, but I think I’ll feel better getting it out in the open. What I want to tell you is that my dog Jack is retarded. 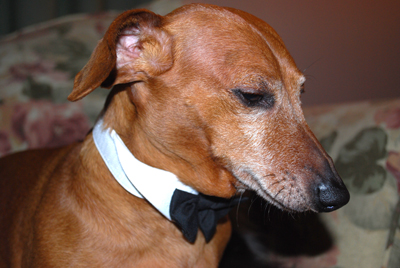 Sure, he looks intelligent here. Who doesn’t in a tux? But I can assure you he is only thinking about Scooby Snacks and sniffing cat ass.

It doesn’t mean I love him less, well, maybe a little when I leave the room for two minutes and walk back in to find this: 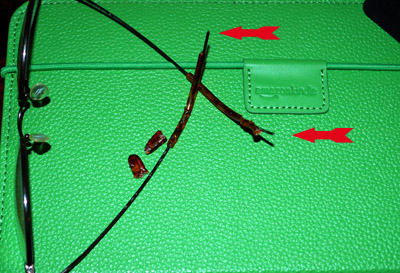 Now they spear me on both sides of my head instead of resting on my ears.

Those are $400 prescription glasses I use to read and watch TV with. He chewed the ends of them off in mere moments when I set them down on the table to go to the bathroom. I guess I should just be glad he didn’t chew my Kindle and I know he would have if he had had more time. Anyway, Jack will be ten years old July 4th. He’s been destroying things in my house for ten years. TEN. YEARS. And not only has he destroyed things, but he has been hospitalized by doing so because the things have made him sick, and those bills have been in the thousands. You’re probably thinking “Well, he’s just a chewer” and while he is that, he also doesn’t come when he’s called, knows no basic commands, and will attack anyone who walks in the house. And before you start giving me dog training advice, please note, I am an ex-vet tech who has more than average knowledge of basic dog training and I can honestly say, Jack doesn’t get it. And as aggravated and angry as I get, I never take it out on him. Never. Because no matter what stupid thing he does, and even though he’s retarded, he’s my dog and part of my family even if he’s a short bus rider of the dog world. 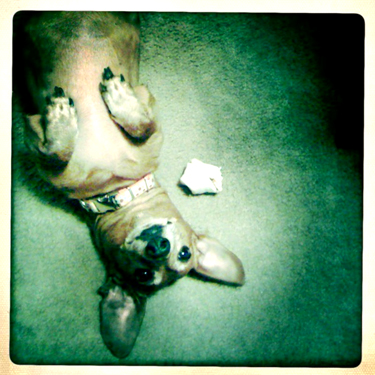 110 Responses to Chewed up skeletons in the closet.