Warning: Creating default object from empty value in /home/jimstant/public_html/fetchmyflyingmonkeys/wp-content/themes/platformpro/admin/class.options.metapanel.php on line 49
 The Great Dinosaur Wars: The Peace Talks. | Fetch My Flying Monkeys
Everyone needs a fleet of flying monkeys to rip the stuffing out of the annoying people in their lives
— Laura
When you’re in severe pain and have just gone through a traumatic medical procedure there’s just one thing to do; write a poem about it. At this rate, the only place Richelle and I will be able to drink will be at the Olive Garden and I don’t want that because I’ll get tanked and wake up with my face in a big ol’ plate of spaghetti. Mmmm…pasta.

Peace talks broke down once the dinosaurs decided the special envoys were all bendy, which probably meant boneless, making them easier to swallow. 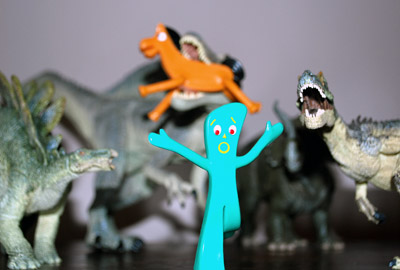 There's no negotiating with dinosaurs if you look delicious. Fact.

Representatives for the Dinosaur Nation later announced that the peace talks can resume after a short hiatus while they digest the latest message delivered by the special envoys.

67 Responses to The Great Dinosaur Wars: The Peace Talks.