Warning: Creating default object from empty value in /home/jimstant/public_html/fetchmyflyingmonkeys/wp-content/themes/platformpro/admin/class.options.metapanel.php on line 49
 All girls dream of their perfect wedding, and I’m no different. Well, maybe a little. | Fetch My Flying Monkeys
Everyone needs a fleet of flying monkeys to rip the stuffing out of the annoying people in their lives
— Laura
If this superpower thing works out, it is going to sound like a giant pan of Jiffy-Pop going off at my office. Who knew there’d be so much back-splatter from a few voodoo curses? I’ll tell you who. Satan, that’s who.

All girls dream of their perfect wedding, and I’m no different. Well, maybe a little.

J and I were sitting around watching Sunday afternoon TV.  I had the remote so we were watching shows like Say Yes To The Dress and Cupcake Wars. I don’t know what it is about that dress show, but I’m addicted.  For me it’s like watching a National Geographic special on another culture; one I’d like to view from afar, never visit.

So we were watching Cupcake Wars and these women were competing to create cupcakes and presentations for weddings. They were talking about different themes for the weddings and receptions, I think one was for a wedding in wine country or some shit when I announced “I know what theme I want for my wedding reception!” J turned and looked at me with eyebrows raised and said “Oh really?” “Yes! I want to rent a big fancy hall, invite all my co-workers and everyone who is on my shit list and when they’ve all arrived, I want the doors chained and padlocked from the outside. ” J just stared at me. “Then I want about 20-30 monkeys released into the room, each armed with a Bic lighter. All that hair spray, cheap polyester, and bitchiness has got to be highly flammable. George and I, of course, will be behind safety glass, with the videographer watching and recording the mayhem, you know, for our wedding album.”  J said “So you’re planning a Stephen King wedding theme?” “Yeah, but no one will know until it’s ten minutes too late.”

Now here is a rendering I rendered for my wedding planner: 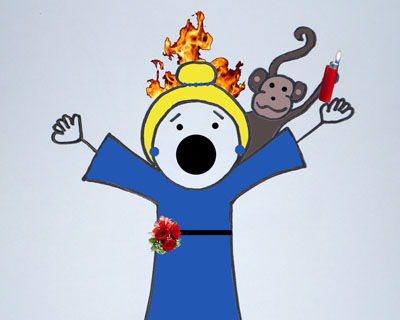 You are cordially invited...

97 Responses to All girls dream of their perfect wedding, and I’m no different. Well, maybe a little.