Warning: Creating default object from empty value in /home/jimstant/public_html/fetchmyflyingmonkeys/wp-content/themes/platformpro/admin/class.options.metapanel.php on line 49
 You can’t always get what you want. | Fetch My Flying Monkeys
Everyone needs a fleet of flying monkeys to rip the stuffing out of the annoying people in their lives
— Laura
Sure, most people just think you’re insane, but you never know when there just might be a talent scout for the insane on the other end of the phone. Sometimes I wonder why J puts up with me, but then I remember how awesome I am. Plus, I think he’s a little afraid of my voodoo if I’m ever jilted. I really should be a relationship counselor.

You can’t always get what you want.

You all have heard me talk about my crazy-ass papaw a lot on here; how he tried to murder me by buying me a poisonous lizard, how he’d force us grandkids to listen to made-up war stories, showing us pictures of General MacArthur and telling us that was him, and how all his stories ended with him getting the clap from some whore in Okinawa. Once when he was babysitting me and my brothers, he gave me a knife to take to Show and Tell and he told me to tell the class that “he took it off a dead Jap.” Yes he did, and yes I did.

After reading my friend Rick’s story about his first bike, I remembered a birthday my crazy-ass papaw help make “special.”  I don’t know how old I was, because I never remember how old I was, but I was of the age I needed a two-wheeled bicycle. I had outgrown my tricycle, and had “borrowed” my brother’s bikes enough to have taught myself how to ride. Training wheels were for suckas. Anyway, my birthday was coming up and months prior I started priming my mom for a new bike. “Please Mommy! I need a bike!” and she’d say “Maybe for your birthday” because she always would say ”Maybe for your birthday or Christmas.” To make things easy for her I picked out the bike I wanted, nay, HAD TO HAVE. It was a lime green Stingray with a yellow banana seat, hand brakes, and shifter! Like this: 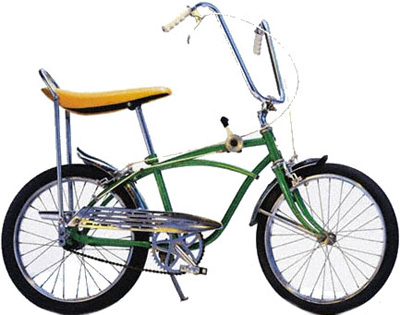 This bike tells the world you are one cool-ass motherfucker not to be messed with.

So the day went by slowly, because in my house you didn’t get your presents until after dinner and birthday cake, and all I could think about was my new lime green Stingray bike and how I better get it soon because daylight was burning. We had dinner, ate cake after I blew out the candles, and I sat there waiting, wishing I’d get my new lime green Stingray bike already. I was handed several brightly wrapped boxes, all too small for a bike and I thought “Oh, okay we’re going to play that game.” So I opened the gifts, thanked whoever I had to thank,  and tossed them to the side. I sat there with my hands folded in my lap. Waiting. Finally my mom said “So Laura, you still want a bike?” “YES PLEASE!” I said with a huge smile on my face.  And that’s when she said “Your grandfather wanted to get it for you.” I suddenly stopped smiling and said “Did he know what bike I wanted? Did you show him the picture?” She said yes. I was still worried.

Within minutes there was a knock on the door. MY NEW LIME GREEN STINGRAY BIKE IS HERE! I jumped with joy!  My mom took my hand and led me outside. I rendered y’all a drawing of that moment: 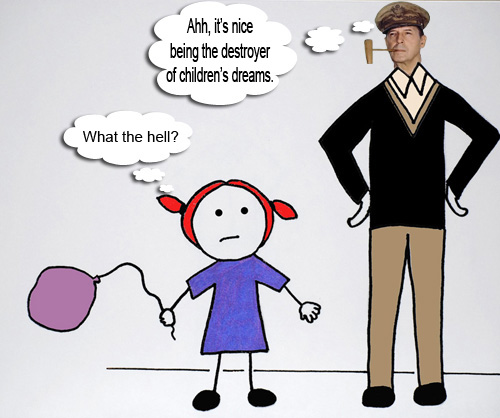 There, leaning on its kick-stand was my ”new” bike:

This bike tells the world you're in Special-Ed.

It was used. It had been refurbed by my papaw. It had god-awful whitewall tires and it weighed 500 pounds. I wanted to cry so badly, but I held them back as my mom said “WHAT DO YOU SAY, LAURA?” Through gritted teeth I robotically said “Thank you, Papaw” holding the tears back. Then my mom told me to get on it. So I did, and as I started to pedal this monstrosity, the chain fell off and  it fell over on me. I swear to God, it was so heavy I couldn’t lift it, so I just laid back and cried. They lifted the bike off of me and I stayed on the ground crying, not because I was hurt, but because my soul was crushed. There was no way I was getting a new lime green Stingray bike now. I stayed on that ground crying softly as my  mom offered my papaw a piece of cake. They went in the house leaving  my brothers there to laugh and dance around me pointing at the bike then at me, reciting a chant of “A retarded bike for a retarded girl!” over and over until they grew tired of it and went back in for more cake. Hours later, as I lay in the same spot I had fallen, tears dried on my cheeks,  my papaw stepped over me  on his way back to his truck and my mom again told me to thank him for my bike and tell him good-bye. Again, I robotically said “Thank you papaw for my bike and good-bye.” I heard him start up his truck and leave. I stayed lying in the grass staring up at the darkening sky thinking life wasn’t worth living without a new lime green Stingray bike. Then my mom squatted next to me, looked down at me and said “You know, there are kids in Africa who don’t even have bikes” and I said “Can we send them mine?”  She laughed, stood up, and told me to put my bike up and get in the house.

I never got a new lime green Stingray bike. I had my monstrosity bike for years until one day I charged out from between two parked cars onto the street with it and got hit by car. No one was hurt. The car was totaled though.

127 Responses to You can’t always get what you want.