Warning: Creating default object from empty value in /home/jimstant/public_html/fetchmyflyingmonkeys/wp-content/themes/platformpro/admin/class.options.metapanel.php on line 49
 One of my first duties as Queen of the World would be to free all of the goats in all the world. I’ll be like a goat Moses. | Fetch My Flying Monkeys
Everyone needs a fleet of flying monkeys to rip the stuffing out of the annoying people in their lives
— Laura
I’m extending Goat Awareness Month because the 144 voodoo dolls I ordered haven’t arrived yet and my pins are backordered. Sure, most people just think you’re insane, but you never know when there just might be a talent scout for the insane on the other end of the phone.

One of my first duties as Queen of the World would be to free all of the goats in all the world. I’ll be like a goat Moses.

Believe it or not, sometimes I say shit just to get a rise out of people. I know! Shocking! One of my favorite people to do this to is J.  J is about the easiest going guy you’d ever want to meet. Seriously. I know I joke about him being a Nazi and hating freedom, but mostly I do this because, well,  J is a politician. Yeah, that’s right, and calling him a Nazi and a freedom hater are things that bother him; that and my incessant talk about my love for George Clooney, but not really, he just rolls his eyes about that. Another favorite pastime of mine is to discuss my World Domination plans with him; OUTRAGEOUS, non-politically correct, violent plans. When I do this, little veins pop out on his forehead, his jaw tightens, and  you can see him physically cringe.  He’ll look at me with his eyes widened and say something like “Laura, you wouldn’t really do that would you?” And I’ll  say something like “Damn skippy I would!” and throw my head back, laugh maniacally, and then straighten up and say all sweet psycho-like ”Let’s go get ice cream!”

Here’s an example of one of our conversations about my World Domination plans just the other day:

Me: “…and then I’d blow their fucking country off the map, taking all their natural resources for my own. And if their neighbors didn’t like it, I’d blow them off the map too! Take that, motherfuckers! Ha!”

J: “If I can accomplish one thing in my lifetime, it’s to make certain you gain no power.”

Me: (ignoring him) “And I’d have a new Manhattan Project to develop a new Neutron Bomb that would kill all the people and leave the goats standing.”

Me: “Dude, you didn’t think I’d rule the world and want to hold hands with the evil, barbaric cultures and sing Kumbaya did you? What’s the point in that? We do that NOW! No. No. No. Tuesdays and Thursdays will be nuclear annihilation days and that will continue until attitudes improve.”

J: “Well, I was hoping you really didn’t mean…how’d you put it?  ’Kill them all and let God sort them out.’”

Me: “I swear, sometimes it’s like we never met. That will be the motto on the new flag by the way. Now let’s go get ice cream!”

And since my voodoo dolls still aren’t in, here’s a picture of a smiling goat: 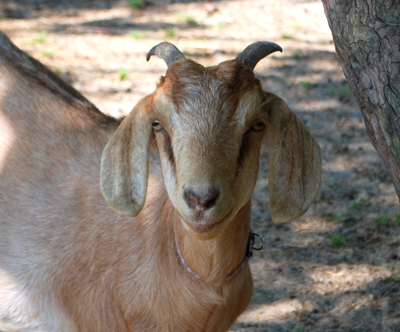 This goat likes the idea of a Neutron Bomb.

84 Responses to One of my first duties as Queen of the World would be to free all of the goats in all the world. I’ll be like a goat Moses.