Warning: Creating default object from empty value in /home/jimstant/public_html/fetchmyflyingmonkeys/wp-content/themes/platformpro/admin/class.options.metapanel.php on line 49
 I’m extending Goat Awareness Month because the 144 voodoo dolls I ordered haven’t arrived yet and my pins are backordered. | Fetch My Flying Monkeys
Everyone needs a fleet of flying monkeys to rip the stuffing out of the annoying people in their lives
— Laura
I would slap a white harness on Jack and use him as my seeing-eye dog, but I’m pretty certain he’d head straight for the freeway, then a cat’s ass. One of my first duties as Queen of the World would be to free all of the goats in all the world. I’ll be like a goat Moses.

I’m extending Goat Awareness Month because the 144 voodoo dolls I ordered haven’t arrived yet and my pins are backordered.

Someone asked me yesterday why I liked goats so much and I said because they’re awesome and they said “Were you around them much as a child?”  Well, I remembered being around some at my cousin’s farm a few times, but then it occurred to me, goats saved my life once.

You may remember I told y’all about my mom dropping my brothers and me off at the Cincinnati Zoo when we were kids and once I was attacked by a swan on the zoo train. Well anyway, like I’ve said before, when I was a little kid you never heard about child abductions and stranger danger. Hell, one of my crazy-ass papaw’s favorite sayings was “You can’t leave a bunch of Irish kids in a hot car without returning and there’s two extra” or something like that.  Crazy sonsabitch.  Anyway, so my mom always bought summer passes for us at our favorite place, the zoo. She would strap watches to each of us, shove some money for food in our pockets and then drop us off as the zoo opened and then pick us up at a specific time in a designated spot, usually near the entrance. I’m pretty sure she relished this time away from us because most of the time she barely slowed down when she shoved us out of the car door screaming “And look after your sister!” over her shoulder as she sped out of the parking lot. Of course the first thing my brothers would do was ditch me because I cramped their style or something.  I never squealed on them either because I knew any trouble would make our zoo adventures end.

To say I knew the Cincinnati Zoo like the back of my hand was an understatement. My favorite place to be was the Children’s Zoo area and, of course, the train.  This particular day I headed for the children’s section clutching a bag of popcorn I bought to feed the ducks and chickens. As I was walking through the area I noticed a group of handlers were walking a mother elephant and her baby. They took them both in a pen, turned the momma around and walked her out, shutting the gate right behind her, locking the baby in. “Oh cool”, I thought, “the baby elephant will be in here today!” They walked the mother elephant out the side gate and then all Hell broke loose. The momma elephant was trumpeting, the baby elephant was trumpeting, and the handlers started screaming. There weren’t many people there because it was so early, but the ones who were there started running. I looked up and saw a huge momma elephant all pissed off charging toward me with four or five handlers with sticks at her sides. SWEET BABY JESUS! I threw my bag of popcorn, screamed and turned and ran. The handlers were yelling “GET OUT OF THE WAY!” Which meant most people veered off of the main path that lead to her baby, but not me. No sir. I ran directly in front of the elephant, toward her baby, screaming bloody murder and waving my arms the whole while. AHHHHHHHHHHHHHHHHH! I swear to God I could feel that elephant’s breath in my hair when suddenly it happened.  Off to my left I saw a pen with five or six new baby goats. GOATS! “They weren’t there yesterday” I thought,  and I quickly swerved toward them, barely being missed by the stampeding elephant’s foot in the process. I rendered y’all a drawing: 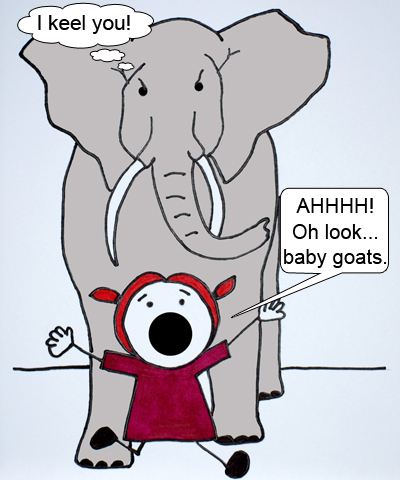 I climbed the fence of the goat pen, and jumped. The momma elephant ran up to her baby’s pen and the handlers opened the gate and let her in. The mother elephant was back with her baby and I was surrounded by baby goats. All was right with the world until the handlers saw me and yelled “Hey kid! Get out of the goat pen! Now!” Doodieheads.

87 Responses to I’m extending Goat Awareness Month because the 144 voodoo dolls I ordered haven’t arrived yet and my pins are backordered.