Warning: Creating default object from empty value in /home/jimstant/public_html/fetchmyflyingmonkeys/wp-content/themes/platformpro/admin/class.options.metapanel.php on line 49
 I would slap a white harness on Jack and use him as my seeing-eye dog, but I’m pretty certain he’d head straight for the freeway, then a cat’s ass. | Fetch My Flying Monkeys
Everyone needs a fleet of flying monkeys to rip the stuffing out of the annoying people in their lives
— Laura
Happy Memorial Day Weekend! I’m extending Goat Awareness Month because the 144 voodoo dolls I ordered haven’t arrived yet and my pins are backordered.

I would slap a white harness on Jack and use him as my seeing-eye dog, but I’m pretty certain he’d head straight for the freeway, then a cat’s ass.

Last week after being attacked in my attic by that rogue squirrel, my left eye started itching. I didn’t think anything of it but then by the end of the week my right eye started itching and they were driving me crazy scratching them. Great. The squirrel probably gave me eye rabies. Finally I couldn’t take it anymore and I called my optometrist to see if he could work me in. He could. He took me right back in an exam room after I arrived and looked at my eyes in that light contraption and then stained them with a few drops of yellow stuff. Then he looked at them again with his light device and said I had scratched corneas. I asked if I could have gotten that from being pistol whipped by a rabid squirrel and he just kind of widened his eyes at me and pretty much ignored what I said. Yes, he knows me. He asked if I had been taking allergy medicine and I said I had been taking Benadryl for my ear, where, by the way, I’m still not convinced a roach hasn’t set up housekeeping. He said that my eyes had probably dried out from the Benadryl and all the air-conditioning and fans blowing didn’t help. Then he said it. Oh yes he did. He said “As you get older you stop producing as much tears.” What. The. Fuck.  I spun around to give him the Evil Eye, but I was dabbing leaking yellow crap from my eyes with a tissue so all I could manage was to pout my face and give him an evil drippy squint. He nervously said “Uh, well, at least it’s not from being pistol whipped by a squirrel. Right?” Uh. No.

So as Goat Awareness Month winds down I’m now starting Voodoo Curse Month where everyone who pisses me off gets voodooed. I have to go back for a follow-up and eye exam. I’m sure he’ll say my vision has worsened since I’m getting older. He’ll get doubled voodooed. Sonsabitch. 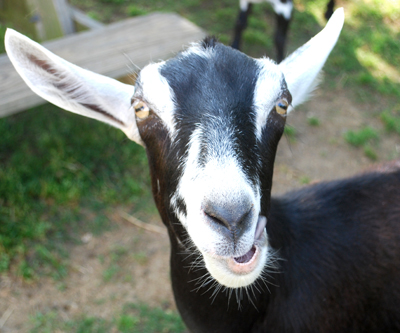 Never forget the awesomeness of goats. Or you'll be voodooed.

99 Responses to I would slap a white harness on Jack and use him as my seeing-eye dog, but I’m pretty certain he’d head straight for the freeway, then a cat’s ass.