Warning: Creating default object from empty value in /home/jimstant/public_html/fetchmyflyingmonkeys/wp-content/themes/platformpro/admin/class.options.metapanel.php on line 49
 The End Is Near! | Fetch My Flying Monkeys
Everyone needs a fleet of flying monkeys to rip the stuffing out of the annoying people in their lives
— Laura
There’s only one thing more disgusting than the bathrooms at work, and that’s the breakroom. The Dinosaur Diaries: Entry Three.

The End Is Near!

One of the ladies in my posse missed going to the goat farm the other week. She became consumed with goat envy after seeing my pics and cried until we promised to take her. So we plan on going back this coming Saturday, May 21st. Today I found out that that’s the same day Jesus is supposed to come back and get all the good people. When I told her it was Judgment Day she kind of looked at me blankly and said “So? Jesus can find us there.” And I said “Well, I myself want to get back to loot all those empty houses early.” I bet good Christians have some good shit. She told me I was awful and I said “I know you are, but what am I?” and she said “Going to Hell.” Then I said it may be cool to spend the Rapture at a Raptor Center but she cried again because she has her heart set on playing with the goats and who can blame her? Goats are fucking awesome. Also there’s a goat there named Snowball and if I stand a chance in Hell, it’s with Snowball. Get it? Snowball? Chance in Hell? I don’t know what I’m saying. I think I may have just condemned my soul to an eternity of fire and brimstone. Or not. But here’s a drawing I rendered of Snowball and me in Hell: 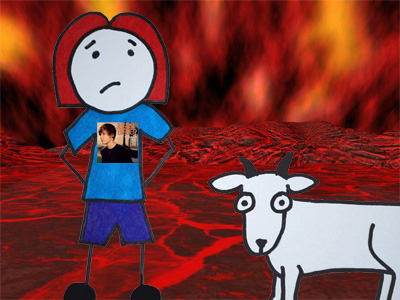 Oddly, it looks very similar to my rendering titled “Summertime in South Carolina With Snowball.”

46 Responses to The End Is Near!