Warning: Creating default object from empty value in /home/jimstant/public_html/fetchmyflyingmonkeys/wp-content/themes/platformpro/admin/class.options.metapanel.php on line 49
 Nazis don’t like freedom, goats, or lotteries. Oh, and sometimes their bacon taste like cat food. *EDIT* | Fetch My Flying Monkeys
Everyone needs a fleet of flying monkeys to rip the stuffing out of the annoying people in their lives
— Laura
As if an earthquake, tsunami, and nuclear reactor disasters aren’t enough… How Satan stole my calzone.

Last week I bought four lottery tickets because there were two lotteries and they were giving away a gazillion dollars on each one. The drawings were this past weekend and I didn’t win a penny and that really sucks because I really thought I’d win. As a matter of fact, my retirement plan is solely based on winning the lottery. I even wrote out a letter of resignation, which really wasn’t so much a “letter” as it was two words written on the back of an old credit card offer envelope with a half dried-out Sharpie. It rhymed with “buck chu” and it was one of the most heartfelt notes I have ever written in my entire life.

I told J I was upset about not winning and he was all “Lotteries are a tax on innumerate people” all snobby and superior like and I’m all “I know you are but what am I?” and he was all “Four dollars poorer.” He’s just bitter because I told him after I won I was going to buy the place where I work so I could bulldoze it down and build a Killer Robot factory, and right before I paid hobos to fight each other in the parking lot I was going to go track down George Clooney and woo him with my money and, of course, my charm. J laughed and laughed and laughed and it started pissing me off because it was like he didn’t think I was charming so as he slept that night I called Thelma in and tried to coax her to lie on his face and suffocate him. But before she did, he kind of woke up and I quickly pretended to be asleep. I was going to get her to finish the job as soon as he dozed off again, but I fell asleep myself. Apparently even planning murder-by-cat-ass can’t keep me awake. In the morning as I was cooking breakfast, I called Thelma over to lick the bacon that was on his plate which is almost as bad as being suffocated by her, but not really. Besides, I don’t want him suffocated just yet. You see, I remembered my birthday is coming up and J said he was going to get me a Keurig Coffee Brewer and I really like coffee, so he’s safe. For now.

I couldn’t wait. I got myself a Keurig Office Pro Brewer while on my lunch break. I’ve drank three cups since getting home. I’m so buzzed on caffeine I can see the future, and I’m seeing a lot of cat ass in J’s. Weeeeeeee! 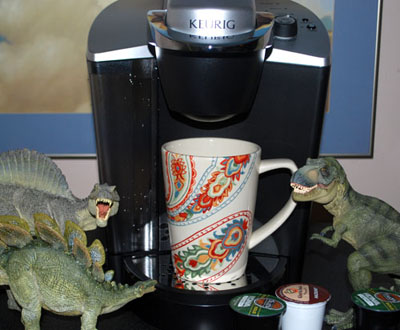 48 Responses to Nazis don’t like freedom, goats, or lotteries. Oh, and sometimes their bacon taste like cat food. *EDIT*