Warning: Creating default object from empty value in /home/jimstant/public_html/fetchmyflyingmonkeys/wp-content/themes/platformpro/admin/class.options.metapanel.php on line 49
 As if an earthquake, tsunami, and nuclear reactor disasters aren’t enough… | Fetch My Flying Monkeys
Everyone needs a fleet of flying monkeys to rip the stuffing out of the annoying people in their lives
— Laura
Every super hero has a nemesis and I’m no different. Now all I need is a really cool outfit that doesn’t make my ass look big, oh, and a super power and I’m set. And, oh yeah, a cool theme song. Nazis don’t like freedom, goats, or lotteries. Oh, and sometimes their bacon taste like cat food. *EDIT*

As if an earthquake, tsunami, and nuclear reactor disasters aren’t enough…

On my drive home I turned on the radio, something I rarely do, and they were talking about Japan’s nuclear power plants still getting overheated and still in danger of leaking all over the place. “Damn,” I thought, “wasn’t it radiation that created Godzilla? I really need to speed up my preparing for the apocalypse.”

Soon I was home and as I walked in my house, I immediately knew something was wrong. I stopped in my tracks and thought “This is odd. Jack always runs up to greet me.” I quickly called out for him. He came running from the kitchen with something in his mouth. I asked him what he had and he turned and ran back into the kitchen with me right behind him. What did he have in his mouth you ask? MY ALLOSAURUS. That’s right, one of my dinosaurs! Fortunately it appeared he just got his mouth on him because the Allosaurus suffered no injuries. Thank God.

Now I think I’m going to send Jack to Japan since he enjoys destroying reptiles so much. 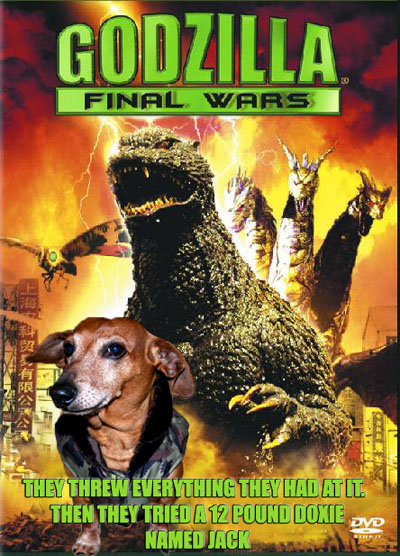 And yes, I know Thelma threw the Allosaurus down to him. She’s packed too. 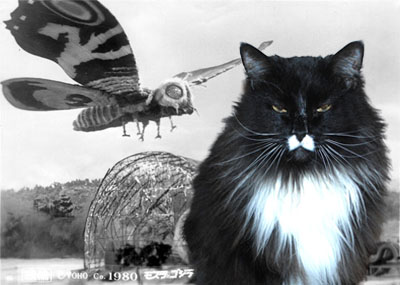 36 Responses to As if an earthquake, tsunami, and nuclear reactor disasters aren’t enough…