Warning: Creating default object from empty value in /home/jimstant/public_html/fetchmyflyingmonkeys/wp-content/themes/platformpro/admin/class.options.metapanel.php on line 49
 Happy St. Patrick’s Day! | Fetch My Flying Monkeys
Everyone needs a fleet of flying monkeys to rip the stuffing out of the annoying people in their lives
— Laura
I’m feeling much better, thank you for asking. NOT. Even awesome people get sad over stupid things. The biggest difference though is awesome people make a list and then get the fuck over it. 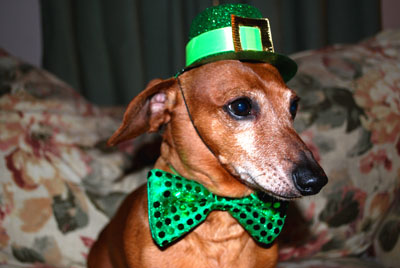 It’s St. Patrick’s Day and I’m Irish and by law I should be drunk but the last time I drank was last Friday when Japan had that horrible earthquake and tsunami and I thought I had a roach in my ear only to find out it was an ear infection. I was with my friend Richelle and we decided to have a few drinks to celebrate there not actually being a roach in my ear and discuss current world events. We ended up slamming back shots with a bunch of college kids and before I knew it, Richelle and I were in an inflatable dingy in the camping section of Wal-Mart screaming “SAVE YOURSELVES MOTHERFUCKERS!” We had on life vests and camo hunting hats with mosquito netting face veils and had gathered supplies consisting of two boxes of wine, a bottle of orange juice for scurvy, and a volleyball in case the tidal wave carried us to an uninhabited island and we’d have another friend if we started getting on each other’s nerves. The wave never came, but security did, so we quickly abandoned ship and our provisions to go pick up some aspirin because we’re too old to party with college kids and we knew we’d need it in the morning. And now it’s St. Patrick’s Day and I should do something Irish but I’m completely burned-out and I can’t even wear anything green because I just looked and I don’t even own anything green and the only thing open is Wal-Mart and I’ve been “banned for life” from there. So fuck it.