Warning: Creating default object from empty value in /home/jimstant/public_html/fetchmyflyingmonkeys/wp-content/themes/platformpro/admin/class.options.metapanel.php on line 49
 Mmmmm crab legs… | Fetch My Flying Monkeys
Everyone needs a fleet of flying monkeys to rip the stuffing out of the annoying people in their lives
— Laura
Most of my fantasies involve a lot of pettiness, revenge, assaults, and mayhem. Oh, and George Clooney. I would go to the doctor more often if my health insurance, Death Panels #1071 Us, would actually pay for something. *UPDATED*

It’s been almost two weeks since my posse and I went out of town. Yes, I have decided to call them “my posse” because it sounds cooler than “my two traveling friends.” So anyway, we’re going to Calabash North Carolina this weekend. It’s my job to pick the restaurants because now I’m a big ole’ baby about what I eat since starting this bullshit low-carb diet. I googled seafood joints in Calabash and checked their menus to make sure they didn’t just sell fried seafood. Calabash IS famous for their fried seafood by the way. So I found this restaurant that offers all-you-can-eat crab legs and I about lost my shit because I love crab legs almost as much as I love George Clooney. Almost. I called the restaurant and made reservations and then I told my posse that we would be eating all-you-can-eat crab legs the first meal there and that I planned on eating twice my body weight in said crab legs. Suddenly they were concerned about not only the time factor, but the mess eating crab legs makes because we have tickets to another event after. I told them to shimmah down, it would work out, we just won’t eat like a pack of hyenas on a carcass (which is a total lie, because I we so will) but they kept whining about how messy and how much time it takes to eat all-you-can-eat crab legs. Damn. So I said “Here, I will render you a drawing of the solution.” Here is that rendering: 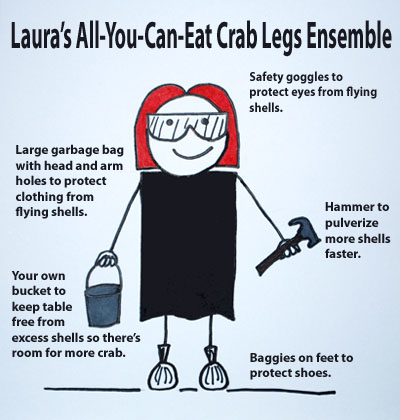 I am a problem solver.