Warning: Creating default object from empty value in /home/jimstant/public_html/fetchmyflyingmonkeys/wp-content/themes/platformpro/admin/class.options.metapanel.php on line 49
 Henceforth he shall be known as “The Sighing Scooter Sonsabitch.” | Fetch My Flying Monkeys
Everyone needs a fleet of flying monkeys to rip the stuffing out of the annoying people in their lives
— Laura
I’m back from my vacation and now you’ll have to suffer through my pictures of it. You’re welcome. The Dinosaur Diaries: Entry Two. *EDIT*

Henceforth he shall be known as “The Sighing Scooter Sonsabitch.”

I go to the grocery store almost every Sunday morning. Early. The reason I go then is to avoid the general public. I don’t care for the general public so most of my errands are run when I have the best chance of avoiding most of them. With that being said, there are other people I run into week after week at the grocery store who I suspect are there at that time for the same reason. We pass each other in the aisles and nod knowingly and go about our business. Except one. This is about that motherfucker and why he has become my arch-nemesis.

This man is probably in his sixties, has a permanent scowl on his face and rides one of the store’s motorized scooters. I see him walking pretty well in and out of the store, even half lifting the scooter back in its rack when he’s done, but who am I to say he doesn’t need it? I’m not. But something makes me think he’s using the scooter for his diabolical plan of being an asshole and he’s pretty good at it.

If the man is in the store, and 9 out of 10 weeks he is, it seems every time I stop to read a label, or pick out the freshest vegetable, THERE HE IS with a nasty look on his face and sighing for all he’s worth, and not because he wants past me, because I don’t block aisles, no, he wants to be in the EXACT spot I’m at. For the longest time I used to say “Excuse me” and move my cart. Hell, I’d go to the other side of the store, and before too long there he was again, sighing and scowling. ALMOST. EVERY. TIME. But I’m not moving anymore. Now I stand my ground. I pretend I don’t see him or hear his sighs. I do what I have to do, sometimes even taking longer than needed, then I look at him and narrow my eyes and he looks at me and narrows his and sighs dramatically. No shit.

This past Sunday, it was even worse. Everywhere I went and stopped, there he was- wanting to be in that exact spot and sighing like a motherfucker. I rendered you all a drawing of me looking at the carbs on a ketchup bottle: 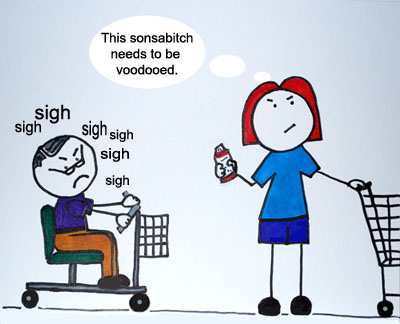 My next stop was in the Hispanic/Ethnic aisle. I’m about to go all Mexican Jesus Candle Voodoo on his ass.

45 Responses to Henceforth he shall be known as “The Sighing Scooter Sonsabitch.”