Warning: Creating default object from empty value in /home/jimstant/public_html/fetchmyflyingmonkeys/wp-content/themes/platformpro/admin/class.options.metapanel.php on line 49
 I pretty much reserved my seat in Hell a long time ago, but I think I may have just had that seat upgraded. | Fetch My Flying Monkeys
Everyone needs a fleet of flying monkeys to rip the stuffing out of the annoying people in their lives
— Laura
It was requested that I draw an illustration of my Chickaboom Prison Dance. I hope this answers all your questions. If you just tuned in, you’ll have to read the previous entry to know what the hell this crazy is. I should put my thumb on a prayer list. Yes, it still hurts and has rabies. Thanks for your concern. That’s called “sarcasm” in case you’re wondering.

I pretty much reserved my seat in Hell a long time ago, but I think I may have just had that seat upgraded.

First I’d like to say that I in no way mean any disrespect to anyone’s beliefs, unless you’re a Scientologist (Aliens piloting DC-8′s? Really?) I was raised Catholic, but stopped attending church as soon as I could get away with not going. Do I believe in God? Yes I do, but probably not the same way you do. With that being said, here’s a telephone convo I had with J on Wednesday who has a family member who just had emergency surgery.

Me: “So how’s everything there?”

Me: “Man, I wouldn’t want my neighbors knowing I was in the hospital. They’d probably steal all my stuff and then sell my house.”

J: “That’s the difference between the city and a small town. Here they’re calling about having him on a bunch of prayer lists and bringing food by.”

Me: “Prayer lists? What the hell is that?”

J: “It’s a list the churches have and they pray for people.”

Me: “So, wait a minute, by being on a list and getting a bunch of people praying, you have a better chance of the prayer getting to the Big Guy and getting a favorable response?”

J: “Laura, it’s not Santa’s List. It’s not to get things. It’s for sick people and people with troubles.”

Now here’s an illustration of me giving God jazz hands after this whole prayer list thingy works out: 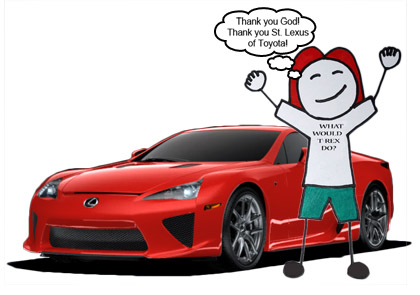 That is a Lexus LFA that starts at $375,000. I’m sure God got it fully loaded for me, so it had to have cost more. For my next prayer list thingy I won’t be so greedy. I just want a baby pygmy goat. One wearing a solid gold diamond encrusted collar with big emeralds dangling down.

34 Responses to I pretty much reserved my seat in Hell a long time ago, but I think I may have just had that seat upgraded.