Warning: Creating default object from empty value in /home/jimstant/public_html/fetchmyflyingmonkeys/wp-content/themes/platformpro/admin/class.options.metapanel.php on line 49
 I may have violated some human rights because I think this would fall under cruel and unusual punishment. | Fetch My Flying Monkeys
Everyone needs a fleet of flying monkeys to rip the stuffing out of the annoying people in their lives
— Laura
It’s Monday and I’m still writing about Sunday stuff and wishing that today was Friday. It was requested that I draw an illustration of my Chickaboom Prison Dance. I hope this answers all your questions. If you just tuned in, you’ll have to read the previous entry to know what the hell this crazy is.

I may have violated some human rights because I think this would fall under cruel and unusual punishment. 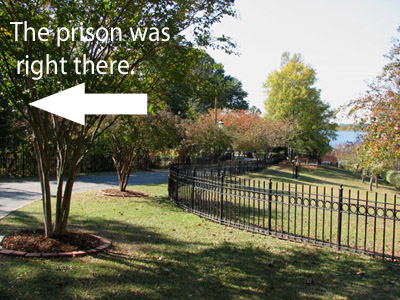 Years ago Columbia had a prison right downtown next to a park. The park is called Riverfront Park and runs along the Congaree River and water canal. I used to run their path which was five miles long. So out to the dam and back was ten miles and it was perfect for running because it was lined with trees and was nice and shady. Anyway, the prison was along the side of the entrance of the park and was surrounded by an insanely huge double fence. The inside fence even looked electrified or something at the top and there was razor wire on both of them and there was a guard tower on that side. A lot of women didn’t like going to the park because the prisoners could scream through the bars of their rooms on that side and often did. When I would tell my friends that I was going to the park, they’d all be, “Oh no! Don’t the prisoners bother you?” and I was like “Well, no, they’re locked up.”

As you’d enter the park the cat calls and such would start. They would start telling you what they were going to do to you and how long they were going to do it, and how much you’d like it. My reply would always be different, depending on my mood. Sometimes I would kiss my hand and slap it on my ass, that being the international sign for kiss my ass. Other times I would flip them off and just keep walking, and sometimes I would holler back at them things like “Yeah, yeah, promises promises” and do a chickaboom chickaboom boom dance, a dance I’d perform that I’m sure just basically looked like that of a seizuring, retarded stripper. “Oh, that’s right, YOU CAN’T COME OUT HERE! HAHAHA!” Chickaboom boom! Sometimes the guards in the tower would laugh; sometimes they’d ask me to move along, especially if my chickaboom chickaboom boom performance would last too long, which they tended to do.

They tore the prison down years ago and put up a bunch of overpriced yuppie condominiums that overlook the river. The fencing and towers are all gone. Now when you go to the park you just see these generic, heinous condos and a parking lot full of Beamers and SUVs. Gone are the desperate men with their faces pressed into bars and screens, cat whistling and maniacally screaming foul, disgusting sexual things. I really miss that prison.

38 Responses to I may have violated some human rights because I think this would fall under cruel and unusual punishment.