Warning: Creating default object from empty value in /home/jimstant/public_html/fetchmyflyingmonkeys/wp-content/themes/platformpro/admin/class.options.metapanel.php on line 49
 I once told my mother that I would rather go to Hell than Heaven, I think with this entry I may have just purchased my ticket | Fetch My Flying Monkeys
Everyone needs a fleet of flying monkeys to rip the stuffing out of the annoying people in their lives
— Laura
Maybe it’s a good thing that I don’t own a killer robot because I can’t even figure out my TiVo An important announcement accompanied by vampires and Jesus just like most of my announcements are except when they’re accompanied by werewolves and Satan and sometimes clowns

I once told my mother that I would rather go to Hell than Heaven, I think with this entry I may have just purchased my ticket

I remember my first Catechism classes in first grade. That was when Sister Jean Marie told us God was as old as time itself and all powerful, and that he did not look like us. So in my child’s mind I imagined God was a Tyrannosaurus rex- old, powerful and non-human in appearance. Plus he could smite the shit out of you just by his mere size and strength. I was really into dinosaurs as a child. Of course I deduced that he was a magical T-Rex because he created stuff and turned people into salt and sicced locusts on folks. A magical T-Rex is pretty badass and everyone knows God doesn’t play games.

It was during this same first grade Catechism class, during a Q & A period, when Sister Jean Marie told us animals didn’t have souls and couldn’t go to Heaven when they died. I remember feeling shock and disbelief. What kind of bogus shit was that? That night, with tears in my eyes I told my mother that I was going to Hell and I preferred it that way. She asked me why I wanted to go to Hell and I told her what the nun told us. My mom told me that the sister was mistaken, that animals do in fact go to Heaven. Then I became concerned about the cows and chickens that were killed for food and she tried to explain that “pets” go to Heaven by telling me that if an animal is loved by a human, then they can get through the Pearly Gates. This was my mother’s attempt at differentiating livestock and companion animals to me.

Why am I telling you this? Because to this day when I see roadkill I still have the urge to “pray it into Heaven.” Not so much wildlife, but when I see a cat or dog, and, well okay, a deer the old habit kicks in. I don’t actually pray, BUT I will make the sign of the cross with a finger or two. Kind of like a priest does over a dying person’s head. It’s more like an OCD, subconscious kind of thing I do. It’s very inconspicuous.

Monday as I was driving to work I was making a turn and there in the middle of the road was a large black furry lump. I imagined it was a dead cat. I cut my wheels so I wouldn’t run over it and with one finger on my right hand that was on the steering wheel, I made my modified sign of the cross. Yay. Another cat in heaven!

That afternoon as I was leaving work, I pulled onto the same road and there was the same black furry lump. The traffic light turned red and I stopped beside the furry mass. I didn’t want to but I turned and looked. Then I laughed. Here’s a pic I took with my iPhone- 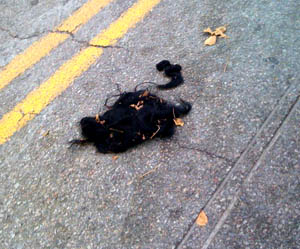 That is a lump of 100% acrylic hair extensions. Fake human hair. Yes, I prayed ‘weave’ into Heaven. May T-Rex have mercy on my soul. 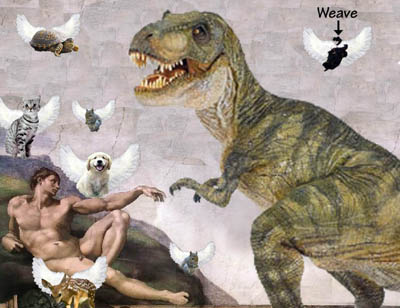 22 Responses to I once told my mother that I would rather go to Hell than Heaven, I think with this entry I may have just purchased my ticket