Warning: Creating default object from empty value in /home/jimstant/public_html/fetchmyflyingmonkeys/wp-content/themes/platformpro/admin/class.options.metapanel.php on line 49
 Hoping my luck holds out. | Fetch My Flying Monkeys
Everyone needs a fleet of flying monkeys to rip the stuffing out of the annoying people in their lives
— Laura
The Munchies. When you’ve completely given up on looking normal.

Hoping my luck holds out.

I don’t want to jinx it, but I’m dying to tell it so here it goes- I have not seen a Palmetto Bug in my house or on my property all summer. I know, right? It’s like a miracle. This is the first summer I’ve lived in the South that I have not seen one of those unholy, diabolical creatures. And if you’re just tuning in and have no idea what I’m talking about, a Palmetto Bug is a cutesy term for giant motherfucking flying cockroaches that are all over the damn place in hot, muggy climates, aka- The South. 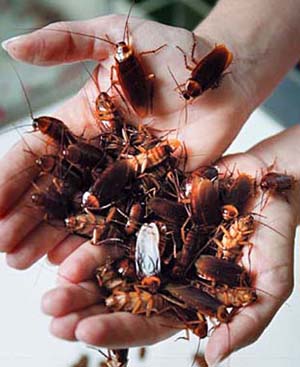 Without a doubt, the person holding these nasty sonsabitches was insane and murdered by them shortly after this photo was taken. RIP, Crazy Person.

The only good thing you can say about them is that they prefer living outdoors. BUT they will sneak in for water. The worst thing you can say about them, and oh my God there are so many bad things to say about them, is that they want you dead. When they sneak in for water they will try to murder you and your entire family. Whenever they are spotted, be it indoors or out, and you try to smash them with like a brick or an axe because shoes and swatters don’t work, those motherfuckers will FLY AT YOUR FACE so that you’ll flail your arms and beat your hands against your head until you have rendered yourself unconscious. Then, of course, while you’re unconscious they will murder you and move on to your family. All of this is FACT. I’m pretty sure. Well, I may have read it somewhere. Or dreamt it. It’s not important. What is important is I haven’t seen any *KNOCK ON WOOD* and I owe it all to my exterminator who came out early this past spring to spray the house. When I asked him to treat the outdoors for Palmetto Bugs, that I didn’t want to even see one within a mile of my property, he dumped a shit-ton of insecticide pellets all over outside even though he said under contract they could only treat a few feet from the house. Thank you, Mr. Exterminator. Now I just hope none mutated from my Chernobyl yard and seek revenge next year. Fuck. Oh well, I won’t worry about that, because for now- 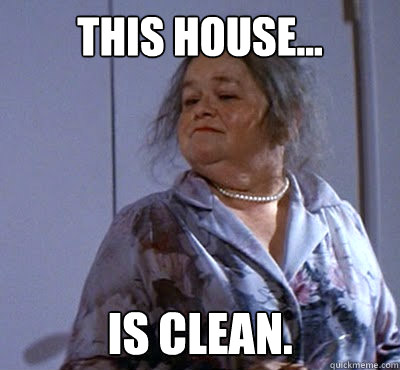 37 Responses to Hoping my luck holds out.