Warning: Creating default object from empty value in /home/jimstant/public_html/fetchmyflyingmonkeys/wp-content/themes/platformpro/admin/class.options.metapanel.php on line 49
 This message is not sponsored nor approved by Kristen Bell. | Fetch My Flying Monkeys
Everyone needs a fleet of flying monkeys to rip the stuffing out of the annoying people in their lives
— Laura
Shit’s about to get real. So clean your guns, restring your crossbows, and oil your chainsaws- this ain’t no dress rehearsal. She’ll probably get Teacher of the Year.

This message is not sponsored nor approved by Kristen Bell.

I pretty much like all animals. But do you want to know one animal that no matter how much the internet tries to tell me is adorable I find just disgusting and heinous as hell? A sloth. 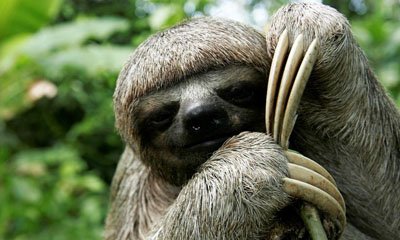 That is one ugly motherfucker right there. Squishy little head with a soup bowl haircut, beady eyes, and just look at those damned claws! And not only is this creature ugly, but he’s got to stink like shit. Dude doesn’t have an anus. That’s right, NO BUTTHOLE. It shits out of his skin pores! Nasty. Know what else is nasty as hell about this abomination? Besides being so fucking retarded that sometimes he’ll grab his own arms thinking they’re tree limbs and fall to his death, he’s so fucking slow that algae and moss will grow on him. 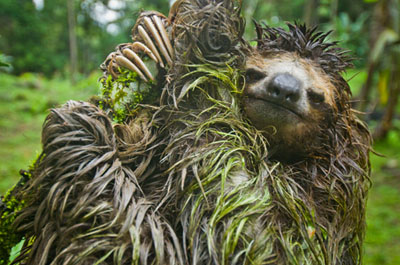 "Oh, let me pet his beautiful fur." NOT.

Now don’t try to tell me that all of God’s creatures are beautiful or some shit like that. If that were true I’d have gone with cross-eyed Johnny Banks to the prom. These motherfuckers are disgusting and no matter how many pictures are posted or how many videos I watch on the internet of them, I just don’t like them.

37 Responses to This message is not sponsored nor approved by Kristen Bell.