Warning: Creating default object from empty value in /home/jimstant/public_html/fetchmyflyingmonkeys/wp-content/themes/platformpro/admin/class.options.metapanel.php on line 49
 Be careful what you wish for. | Fetch My Flying Monkeys
Everyone needs a fleet of flying monkeys to rip the stuffing out of the annoying people in their lives
— Laura
Evidently J is also a dog fashion Nazi. I like cheese.

Be careful what you wish for.

People have started badgering the shit out of me on Facebook about my lack of posting on here. They’re all like “Damn, you can post on Facebook, but you can’t write on your blog?!” and “You can watch TV but you can’t post on your blog?!” and “Wow Laura, you’re a fantastic writer with such a grip on grammar and sentence structure- when will you be writing again?” Okay, I made that last one up. Stop laughing. Anyway, I’ve decided to take up blogging again to stop the constant nagging and begging and to appease my fans. All three of you. I’ve also decided I would curse more. No more holding back. I know.

And because dreams are bullshit and no one gives a flying fuck what you dream about, my first return entry will be about the dream I had last night.

I was in prison and I was hanging out with a group of lesbians because, you know, protection, and I was saying “I don’t even know what I’m in here for!” to one of them, who by the way was a friend of mine I knew years ago and who wasn’t a lesbian in real life but in my dream she was the head of the prison lesbians. She said “You carried a bottle of beer off post.” And then I remembered I had been partying on Fort Jackson and left with a beer and got arrested and then sent to a federal prison for three months. I said “I can’t believe I went to prison for that!” and one of the other lesbians said “You should have paid off the judge like everyone else does. It only cost fifty dollars.” And I was all “ONLY FIFTY DOLLARS?!” and I reached into a pocket on my prison jumpsuit and pulled out my iPhone to call someone to go bribe the judge. But my iPhone was dead and I didn’t have a power cord and no one else did and I started to cry because prison really sucked. Then the next thing I knew I was on some kind of eight hour furlough and went to a friend’s house to check on my dog Jack. When I got there, by way of a prison bus, I talked to my friend who just had a baby and was keeping Jack in the back yard. I didn’t like the sound of that and when I walked to the back to see Jack I saw that her backyard was actually a swamp and Jack was stuck in a small pit of quicksand. I pulled him out and yelled at her and she called the cops and I was all “Oh fuck, I’ll get years added to my sentence now.” So I tucked Jack under my arm and took off running. After I ran for a while I stopped at a bus stop and waited for a bus. I planned on going to Mexico. I had a bus schedule in my hand and I was thinking “I don’t even know what fucking city I’m in, how the hell am I going to make it to Mexico?” and I debated about turning myself and Jack in. Then I woke up.

You know, I always tell J my dreams, in detail because I like that glaze that comes over his eyes and I always end it with “What do you think that means?” and he always, always replies “That you’re bat-shit crazy.” He’s such a kidder that one.

Now here’s a picture of what Jack would look like living in Mexico. He’s the only non-Chihuahua I know of that can pull this look off. 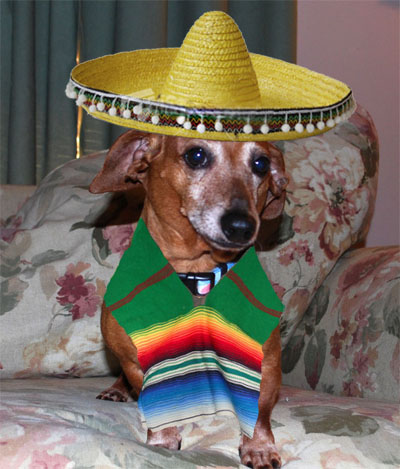 According to Google’s translator that means “Where’s my dog treats, motherfuckers?” I guess that’s right, I don’t know. I’m not an international cursing scientist, though I really should be.

58 Responses to Be careful what you wish for.