Warning: Creating default object from empty value in /home/jimstant/public_html/fetchmyflyingmonkeys/wp-content/themes/platformpro/admin/class.options.metapanel.php on line 49
 Tomatopalooza 2013. | Fetch My Flying Monkeys
Everyone needs a fleet of flying monkeys to rip the stuffing out of the annoying people in their lives
— Laura
I’m really starting to believe my house was built on top of Hellmouth. Jack and his Ducky.

Shortly after I moved here I bought a couple of tomato plants just for the hell of it even though it was pretty late to be planting. I put them in the garden area behind the pool and then basically ignored them- not out of laziness, mind you, but as a scientific experiment. Yeah, that’s it- science. Well, one plant died almost immediately and the other one not only survived but thrived, and just a few days ago a few of the tomatoes ripened enough to be eaten. I decided to celebrate since it had been years since I actually had a homegrown tomato. I called J to join in the celebration.

Me: “Hey! I had two tomatoes ripen on my plant so I’m going to have a Tomatopalooza!”

J: “What? What’s a Tomatopalooza?”

Me: “It’s like a tomato festival minus clowns. You know, to celebrate the harvest of the first ’maters from my plant!”

J: “Umm…and just what do you plan to do at your Tomatopalooza?”

Me: “Well, I think I’ll make BLT’s and sing that “You Say Tomato I say Tomahto” song. Maybe even have party hats!” 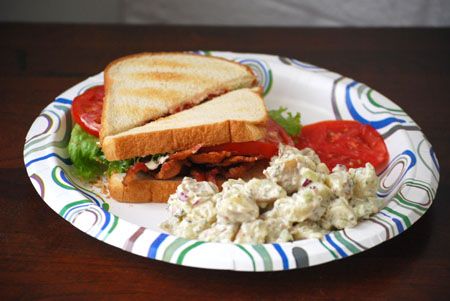 Look what you missed out on, motherfucker.