Warning: Creating default object from empty value in /home/jimstant/public_html/fetchmyflyingmonkeys/wp-content/themes/platformpro/admin/class.options.metapanel.php on line 49
 I’m really starting to believe my house was built on top of Hellmouth. | Fetch My Flying Monkeys
Everyone needs a fleet of flying monkeys to rip the stuffing out of the annoying people in their lives
— Laura
Wassup. Tomatopalooza 2013.

I’m really starting to believe my house was built on top of Hellmouth.

Sunday night I went to the back courtyard to get a pair of work gloves I had forgotten and left on a table. I live in constant fear of insects climbing into my gloves or shoes left outdoors and I simply couldn’t sleep thinking some spider or other creepy crawler was going to bed down and nest in them. J thinks I’m neurotic about bugs and need some sort of bug desensitizing therapy. I think J should just shut the fuck up. Anyway, I turned on the outdoor light, walked out the door, and not two steps out I saw what appeared to be a bat heading for me! I kept walking, thinking “Geeze, your sonar must be pretty off” because as weird as it sounds, I find bats adorable. I mean, all except the guano and rabies. As it got closer I saw it had multiple wings that were fanned out and that it was an odd shape for a bat. In a split second I realized it wasn’t a bat at all but a motherfucking PALMETTO BUG. That’s right, I was being attacked yet again by a gigantic flying roach. I, of course, went into my primal survival mode, or what I like to call my “French Fighting Mode.” I screamed a long blood-curdling little school girl scream and took off running for the door, all the while batting myself like I was on fire. I made it back in the house and slammed the door behind me. Even though I was pretty sure I had made it in without any contact with the hideous sonsabitch, I took a shower just to be sure.

Today the exterminators come back. I told the guy on the phone that I don’t want to see another Palmetto Bug anywhere on my property EVER.  I told them I’d pay for a damned crop duster airplane if I had to. He tried to tell me that it was impossible to get rid of them all because they live in trees and under mulch. I told him “I don’t care if Satan sends them up from the Bowels of Hell every night, I want them all dead, do you hear me? Dead! Nuke them from space if you have to.” He was quiet for a few seconds and said “Umm, we’ll be there tomorrow.” 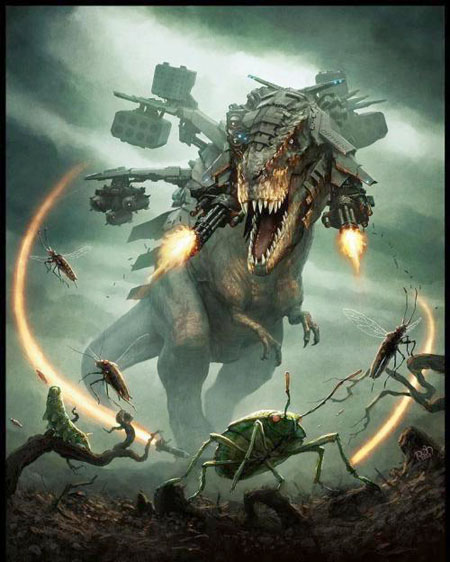 This. This right here is what's needed.

49 Responses to I’m really starting to believe my house was built on top of Hellmouth.