Warning: Creating default object from empty value in /home/jimstant/public_html/fetchmyflyingmonkeys/wp-content/themes/platformpro/admin/class.options.metapanel.php on line 49
 My life is so much better since quitting my job and moving. But this hasn’t stopped me from bitching and complaining. Au contraire mon frère! So I’ve declared this week “Bitch and Moan Week” and shall be posting whiney-ass entries. You’re welcome. | Fetch My Flying Monkeys
Everyone needs a fleet of flying monkeys to rip the stuffing out of the annoying people in their lives
— Laura
Haute Coiffure. Bitch and Moan Week Continues.

My life is so much better since quitting my job and moving. But this hasn’t stopped me from bitching and complaining. Au contraire mon frère! So I’ve declared this week “Bitch and Moan Week” and shall be posting whiney-ass entries. You’re welcome.

You know what moving closer to the coast brought? BUGS. Not only bugs, but BIGGER BUGS. That’s right, GIGANTIC PALMETTO BUGS. Huge flying cockroaches. Larger and MEANER than the ones I left behind in Columbia. 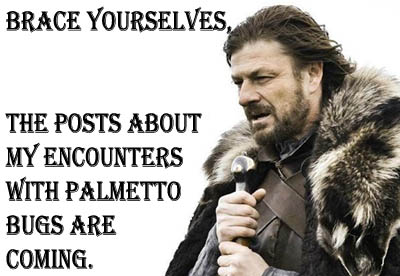 It's like I moved closer to a nuclear reactor, not the ocean.

I saw one in my studio late last week that was as large as my hand. Seriously, AS. LARGE. AS. MY. HAND. I saw it, screamed a high-pitched schoolgirl scream, and that evil sonsabitch turned and looked at me. Now, Palmetto Bugs prefer living outside, but when they’re in your house you pretty much have to kill them or sleep in your car or move. And since I just moved and my car was still filled with crap, I knew he had to die. It was either him or me. Only one was going to come out of this encounter alive.

I froze, quickly glanced around for something to kill it, all the while not turning my head, trying to keep an eye on the Godzilla-sized bastard at all times. We stared at each other, each waiting for the other to make the first move. I stood perfectly still because any sudden movements startles them into attack mode and I wasn’t ready to make my hero move quite yet. I wasn’t facing that thing without a weapon. Shit. Everything looked too flimsy for the job. Fly swatter, shoe, baseball bat. Maybe I could taser him. It was on the bar. But did I place the new battery cartridge in it? Shit. I can’t remember! I can’t risk it. The guns were in the other room. He’d surely reach me before I could make it in there. Shit. Finally my eyes lit upon a case of water that was sitting to my left. That’s it. Twenty pounds of Dasani should do the trick. As soon as my mind was made up I lunged for the case, and in one smooth movement lifted it, turned, and BAM, dropped it right on that asshole as he was preparing to spread his wings and make a run at me. Now though, as I replay it in my head, I did a military drop and roll and weave maneuver on my way to the water.

After I was certain he wasn’t going to toss the case of water off of himself and come at me with a knife, I called my pest control guys and told them not only did I want the house sprayed again (they just had two weeks prior) but I also wanted the outside treated as well and that I didn’t care if they had to hire a crop-duster plane and drop poison on the place, Hiroshima-style. “I want to never see one again. Never!” I exclaimed into the phone.

They came, they treated, they rolled their eyes. And I haven’t seen another one. Yet. I have a freshly cleaned and loaded .357 magnum just in case they’ve built up immunity to the poison. You’ve picked the wrong human, motherfuckers.

67 Responses to My life is so much better since quitting my job and moving. But this hasn’t stopped me from bitching and complaining. Au contraire mon frère! So I’ve declared this week “Bitch and Moan Week” and shall be posting whiney-ass entries. You’re welcome.