Warning: Creating default object from empty value in /home/jimstant/public_html/fetchmyflyingmonkeys/wp-content/themes/platformpro/admin/class.options.metapanel.php on line 49
 The Ted Bundys of the animal world. | Fetch My Flying Monkeys
Everyone needs a fleet of flying monkeys to rip the stuffing out of the annoying people in their lives
— Laura
I will never enter another federal building unless I’m being brought in handcuffed by federal marshals, which, let’s face it, is not outside the realm of possibility. Some people just don’t want to hear a romantical love story. Jaded bitches.

The Ted Bundys of the animal world.

You know what I hate? I hate when you’re going through life thinking you know something for  a fact and then BAM you learn it’s all lies! This happened to me this weekend. Here I was all ‘Oh my God otters are sooo cute!” “Oh my God, otters are sooo sweet!” I even wrote once that I wanted to get a bunch of otters. Well, you can just mark that off my want list.

Here’s the article I read Saturday. Here’s an excerpt for those who don’t click links:

And because I’m  all environmental and shit, I made this PSA poster warning seals of  the danger of otters: 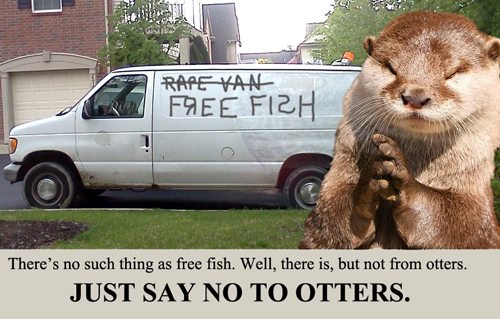 Remember seals: No one can hear you scream underwater. Well, except for fish, and other seals. Oh, and sharks. And probably octopuses.

61 Responses to The Ted Bundys of the animal world.