Warning: Creating default object from empty value in /home/jimstant/public_html/fetchmyflyingmonkeys/wp-content/themes/platformpro/admin/class.options.metapanel.php on line 49
 Jack. | Fetch My Flying Monkeys
Everyone needs a fleet of flying monkeys to rip the stuffing out of the annoying people in their lives
— Laura
I’m going to start a new series on here called “Pet Secrets.” It will be just like Post Secrets, except these won’t be made up. And don’t even bother knocking at my door come the Great Bacon Famine of 2012.

WEDNESDAY
I spent another five hours with Jack today, with most of it being spent working with him and his physical therapist. He’s about the same and we all agree that the only time he really sleeps is when I’m alone with him in a room. I hum “You’re A Very Silly Puppy,” a little ditty I used to sing to him as a pup that goes “You’re a silly puppy, a very silly puppy. Why are you so silly, you very silly puppy?” over and over and over- much like every Britney Spears song- and I rub his shoulders and before too long he’s snoring. Soooooooooooooo I AM BRINGING HIM HOME TOMORROW! I am both ecstatic and terrified.

TUESDAY
Jack started physical rehab today and I got to meet his therapist. She’s super cool and patient and Jack seemed to like her. I was able to stay with him for almost five hours today! I actually laid my head next to him and fell asleep with him after his therapy, half smothering myself in the sheepskin. Now for the best news thus far….. HE MOVED A REAR LEG!! Yes he did. The surgeon came in and said he’s doing good and we’ll take it day by day to see when he can come home. EVERYONE at the Surgical Center said he looked so much better after I stayed with him, that I plan on doing it again tomorrow. 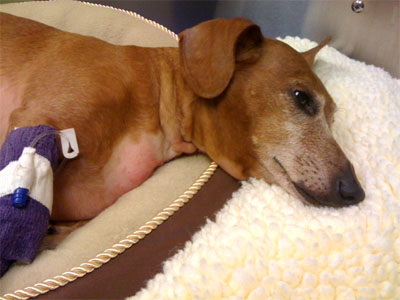 I took this right before we fell asleep. Hey, it's hard work watching someone else exercise.

Monday
I was able to visit Jack this afternoon! He squealed with joy when he saw me. He still can’t move his legs, but they told me that was normal; a lot of swelling and healing needs to take place. But he’s alert and after a bit he calmed down enough to lay his head on my arm. The incision is on the throat and down the chest a tad. They went in the same way they do on people when they operate on the cervical spine. Tomorrow I go back to meet with the Physical Rehab Department who will start working with him soon.

I want to thank each and every one of you for all your warm and kind thoughts at this stressful time. It means a lot to me. 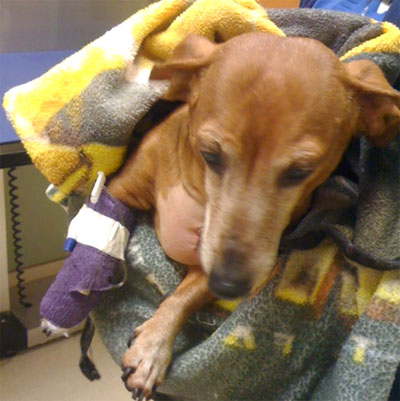 Jack says "Thank you" too.

Friday night my dog Jack and I were sitting on the couch watching television and Jack decided to go into the kitchen and get a drink from his water bowl. Jack walked down his little doggy steps, which I have placed on every piece of furniture he wants to get on because several years ago he had a disc problem ( something that affects one in every four mini-dachshunds) and when he returned he acted like he couldn’t get up the stairs. I thought “Oh shit, he hurt his back! How the hell did that happen?” and I immediately placed him in a carrier for confinement. The next morning I called my regular vet who is open on Saturday morning and took him in. Jack had X-Rays and laser therapy and was placed on prednisone and muscle relaxers and prescribed confinement. I made an appointment for Monday for a follow-up exam and laser therapy.

A few hours later, after my vet was closed, he got progressively worse. And when I say worse, I mean he had become completely paralyzed. My friend Dee drove us to the veterinary emergency clinic, as I sat in the back seat with Jack comforting him as much as I could. Once we arrived, they took him right back to triage. They called in a surgeon for a consultation and Jack had an MRI. Jack had a blown disc in his neck and needed surgery right away. I gave the okay, and a neuro-surgical team (yes, TEAM- two surgeons and two surgical techs) were called in. My friend Dee said she totally expected a helicopter to land outside the ER, which made me laugh. That made me feel better because I had been crying my face off all day. The techs came in and transported Jack to their surgical center where he was to have his surgery. I was told I couldn’t stay with him, which I completely understood. The surgeon called me after 11:00 pm Saturday night to tell me the surgery went well and that Jack was in ICU where they monitor them around the clock. Then he called me early Sunday morning to tell me that these surgical cases are “always worse the day after surgery” and that Jack was still in ICU and being kept sedated.

So that’s where we stand now. It’s Sunday night, Jack’s in ICU and will probably stay there a few more days. I want to thank everyone for their well-wishes on Facebook, where I tried to keep everyone informed as much as I could.  If you can, please keep him in your thoughts and send good vibes to him for a speedy recovery. I need my lil boy back home with me because someone has to keep these damn cats in line and the pillows and shit aren’t gonna destroy themselves.