Warning: Creating default object from empty value in /home/jimstant/public_html/fetchmyflyingmonkeys/wp-content/themes/platformpro/admin/class.options.metapanel.php on line 49
 And thou shall drinketh thy gin and eateth thy Circus Peanuts, so sayeth I. | Fetch My Flying Monkeys
Everyone needs a fleet of flying monkeys to rip the stuffing out of the annoying people in their lives
— Laura
Ugh. Why can’t we outsource our Mondays to India? In honor of Talk Like a Pirate Day- Arrr, it’s only Wednesday and I think I have scurvy.

And thou shall drinketh thy gin and eateth thy Circus Peanuts, so sayeth I.

I got ordained last week. 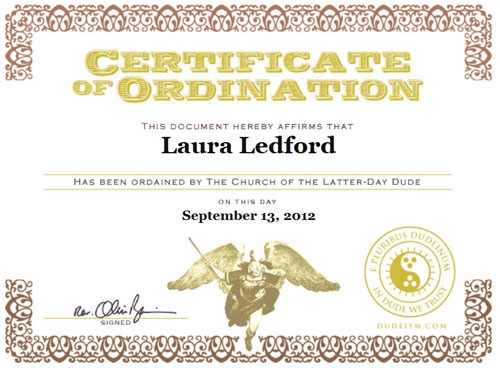 That’s right; I’m a pastor in The Church of the Latter-Day Dude. When I told J he was all “Umm, okay if you say so.” and I said “Seriously, the site said I could even marry people, but to check with my state’s laws first!” and J said “You won’t even go to a wedding, why do you want to marry people?” and I told him I wasn’t interested in marrying people, that’s just what the site said. No, what I wanted was to smite people into Hell, condemn their souls into eternal hellfire and damnation! And then I laughed a maniacal laugh. He was all ”Laura, sweetie, that’s God’s job, not a minister of some fake Internet church.” and I was all “DAMMIT!  That’s so not fair!” And he rolled his eyes and shrugged. Then I asked him if I could at least get people to tithe to me, and he said he doubted it since I had no real congregation and anyone who would follow me probably had already been forced to sign over their power of attorney to some sane, legal guardian. And then he laughed a maniacal laugh. Motherfucker.

55 Responses to And thou shall drinketh thy gin and eateth thy Circus Peanuts, so sayeth I.