Warning: Creating default object from empty value in /home/jimstant/public_html/fetchmyflyingmonkeys/wp-content/themes/platformpro/admin/class.options.metapanel.php on line 49
 Talking smack. | Fetch My Flying Monkeys
Everyone needs a fleet of flying monkeys to rip the stuffing out of the annoying people in their lives
— Laura
Cereal Killer. There Be Dragons.

It’s summer here which means it is flip-flop weather, and by “flip-flop weather” I don’t mean wearing sandals and playing on a beach or going to cookouts with friends. No, what I mean is it’s hot as hell and humid and I literally want to smack the shit out of people with a flip-flop almost EVERY. DAY. I’ve had stomach rabies or cholera for the past few days, I don’t know which. I’m not a communicable disease scientist- though I really should be. I’ve been hot and cranky and I hate to blog when I’m all pissy but I’ve received tons of email (READ: One.) wondering where I’ve been so I decided to sit down and type this out because even stomach rabies (and/or cholera) and dreams of flip-flop murder can’t stop my attention whoreness. I’m a professional like that. And speaking of professional, I still can’t quit my job and move to a small town and get a daisy bike and a pet goat because I still haven’t won the lottery, even with my voodoo altar and offering my soul to Satan. When I mentioned this to J he was all “Lotteries are for people who are bad at math” all hoity-toity and superior and shit and all I could picture was beating him unconscious with a flip-flop as I counted the blows. “…ten *SMACK* eleven *SMACK* WHO’S BAD AT MATH NOW, MOTHERFUCKER? twelve *SMACK*..” Then I’d like to flip-flop smack the sonsabitch at the store who keeps selling me non-winning lottery tickets when I specifically ask for “winning tickets.” God. People. 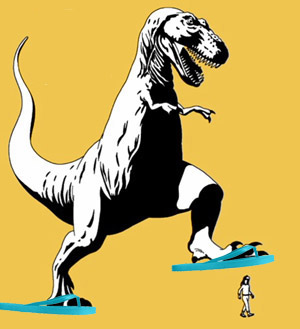 Aren’t you glad I blogged?