Warning: Creating default object from empty value in /home/jimstant/public_html/fetchmyflyingmonkeys/wp-content/themes/platformpro/admin/class.options.metapanel.php on line 49
 If this shit doesn’t stop, I’m going to name my car “The Wildlife Manager.” | Fetch My Flying Monkeys
Everyone needs a fleet of flying monkeys to rip the stuffing out of the annoying people in their lives
— Laura
Haters Gonna Hate. Huzarensla

If this shit doesn’t stop, I’m going to name my car “The Wildlife Manager.”

Yesterday I was driving to work at o’dark thirty in the morning, listening to some Nicki Minaj on the radio, trying to figure out what in the hell she was rapping about, when suddenly a small brown creature jump out from the grass on the ride side of the road. It was a rabbit. It stopped directly in front of me, and as I was applying the brakes, figuring it would dart away across the road, it made the fatal mistake of trying to lunge back from whence it came. I heard my right tire crunch and then throw it into my wheel-well even over the frantic highly-synthesized craptastic music. I cringed and thought “Oh hell that’s nasty” meaning the rabbit, not the song, though the song did suck. It was too dark to see what, if anything, was left on the road in my rear view mirror and then my imagination started getting away with me that maybe the rabbit was hanging on under my car, like DeNiro in Cape Fear, seeking revenge for the little hit-and-run I just pulled on his ass. But I knew that was crazy, that there was no way a tiny little bunny could have survived the trauma of being rolled over by a tire and then slung into the wheel-well. But just to be on the safe side when I got to work, I turned off my lights, slammed it into park and ran like hell into the building. I haven’t lived this long by not listening to that crazy voice in my head.

And even though I’m pretty certain that little rabbit was capable of murder, I still owe him a name and a poem of eulogy for smashing him.

Where were you coming from Max Cady when you jumped into the road?
Perhaps you just got finished breaking in and robbing someone’s abode?

Whatever it was you were doing, I’m certain you were up to no good.
You appeared to be a hoodlum rabbit, probably casing my hood.

But even though you were evil, with prison tats under your fur,
I’m sorry that I hit you, but you were just a wee brown blur.

And I know I didn’t just nick you or bruise you at the most.
So please don’t kill me Max Cady the Murderous Rabbit’s ghost. 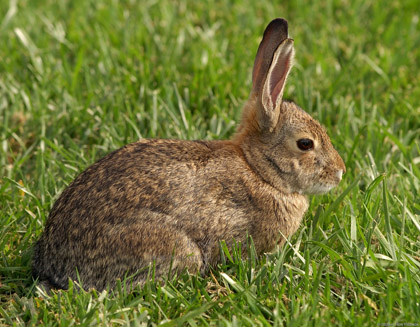 P.S. Like all road kill, I prayed this rabbit into Heaven. So if you get there and you see a pissed-off tattooed rabbit coming towards you, RUN LIKE A MOTHERFUCKER!

54 Responses to If this shit doesn’t stop, I’m going to name my car “The Wildlife Manager.”