Warning: Creating default object from empty value in /home/jimstant/public_html/fetchmyflyingmonkeys/wp-content/themes/platformpro/admin/class.options.metapanel.php on line 49
 I think I’ve been banned from the South Carolina State Museum. | Fetch My Flying Monkeys
Everyone needs a fleet of flying monkeys to rip the stuffing out of the annoying people in their lives
— Laura
Mike Wallace is dead and I don’t feel too good either. My friend went to Vegas and all I got were these fucking mints.

I think I’ve been banned from the South Carolina State Museum.

After work on Tuesday one of my friends and I went to the South Carolina State Museum to see the Body Worlds Vital exhibit before it left town. That’s the one with actual dead human bodies that have been “plasticized” and filleted out all artsy like. I have one word to describe it- TESTICLES. There were testicles everywhere you looked. Seriously. Everywhere. I don’t care if you were looking in a display case of the circulatory system, there were a set of nuts thrown in there.  But I’m getting ahead of myself. The best part of the trip was when my friend and I went to purchase our tickets when we first arrived. As I handed the teller my debit card she looked at my nails and said “Ooh I love your nail polish!” I said “Thank you” and  turned and smirked at my friend who had earlier rolled her eyes at my choice of nail color. Immediately, I started exaggerating every movement with my hands like I was one of those models showing the audience the car behind curtain # 2 on The New Price Is Right. She handed me a pen to sign my receipt and I was all ‘oo la la’ with my hands, being as annoying as I possibly could signing it and handing it back to her. I then started pointing the way to the exhibit.

As soon as we reached the exhibit there was already a small group of people in front of us with one guy in hospital scrubs. The guy in the scrubs was all Captain Know It All and was loudly pointing out and reading all the labels like he knew what the fuck he was reading and one of the teenagers in the group was all “Wow, how do you know this?” And he said “I watched the video.” and my friend and I looked at each other and busted out laughing. I knew I knew more anatomy than this bozo so I started pointing things out with my hand model hands and loudly announcing things like I was a tour guide. Things like ”There’s a nut sack in here.” and “There’s his schlong.” ”Look! Here are some more balls!” “More nads in here too, next to that vajayjay!“  and my friend’s favorite ”There’s his butt hole!”  You know, being all scientifical and shit with my hand model presentation hands. Captain Know It All got all pissy and led his group as far away from us as possible BUT a bunch of elderly ladies joined us and were delighted to play the “Find the Testes In The Display Game” we invented. Then after looking at more balls than Wimbledon, we departed right before security arrived.

Now this is where I would insert a bunch of pictures of dead guy’s testicles I took there, but they did not allow photography, and I’m not going to google “dead guy’s testicles” to post random dead guy’s nutsack pictures from the Internet. I did, however, get a shitty camera phone picture of my nails. 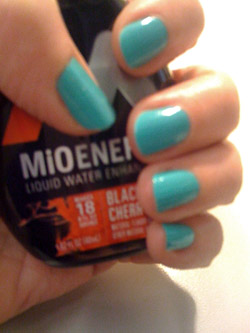 And NO. I'm not photoshopping any dead guy's balls in my hand. I want a job as a hand model NOT a career doing hand jobs.

P.P.S. MiO Energy Liquid Water Enhancer is really good stuff. They should hire me as a hand model.

P.P.P.S. Neither China Glaze nor MiO Energy Liquid Water Enhancer paid me to write about them. Neither did any dead guy’s balls.

70 Responses to I think I’ve been banned from the South Carolina State Museum.