Warning: Creating default object from empty value in /home/jimstant/public_html/fetchmyflyingmonkeys/wp-content/themes/platformpro/admin/class.options.metapanel.php on line 49
 Living the dream. | Fetch My Flying Monkeys
Everyone needs a fleet of flying monkeys to rip the stuffing out of the annoying people in their lives
— Laura
Is it Friday yet? And I shall call him “My Precious.”

When I was a little kid growing up in Cincinnati, an ice cream truck would drive past our house playing his carny music almost every day in the summertime. When my brothers and I could talk my mom into getting us ice cream, which seemed like one out of a hundred-trillion times, one of us kids would run like the wind and practically lay across the street to make him stop. My mom would then walk to the truck with us and would tell the man she wanted three chocolate (for my brothers) and one vanilla (I was a vanilla ice cream fiend) soft-serve cones and then as he handed them to her one at a time, she would turn and hand one to each of us. EVERY TIME I would stand beside my mom and look up and say “Mommy can I have sprinkles on mine?” because I’d seen them on other kid’s cones and they looked so colorful they had to taste magical! But my mom’s reply was always “No.” and I would say “Why not?” doing my best not to whine because whining meant no ice cream and plain ice cream was better than none. She would look down at me and say ”We can’t afford sprinkles.” She would hand me my bare white vanilla cone and I would take it, turn towards the house, tears forming in my eyes while I licked the sides of the ice cream before it melted down my hand. I would think about how awful it was being poor and I swore that one day I would grow up and I would get a job and make so much money that I would always have sprinkles, not only on my cones from the ice cream truck, but I’d be so rich I’d have sprinkles in my house. 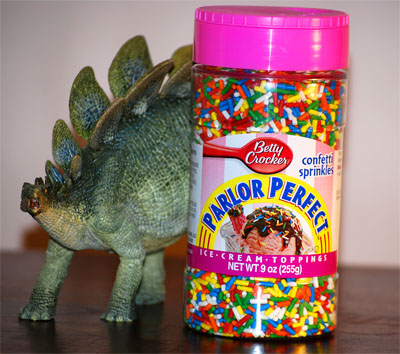 And I always do.

P.S. Of course it wasn’t until I was much older that I realized we were not poor. We lived in a five bedroom house, went to private schools, and had a housekeeper. I asked my mom about how we were always “too poor” for things like sprinkles, streamers for our bike’s handlebars, and allowances. She just laughed and said something like “It shut you up, didn’t it?” and she’d laugh again. I was raised on lies. All lies. But I’m still keeping sprinkles in my house. I work hard for them.

90 Responses to Living the dream.