Warning: Creating default object from empty value in /home/jimstant/public_html/fetchmyflyingmonkeys/wp-content/themes/platformpro/admin/class.options.metapanel.php on line 49
 More proof that J is a freedom-hating Nazi. | Fetch My Flying Monkeys
Everyone needs a fleet of flying monkeys to rip the stuffing out of the annoying people in their lives
— Laura
J has always said he views it as his responsibility to mankind to make sure I never have any political power whatsoever. I’ll have that motherfucker imprisoned right after the election. I was told that before I could debate Obama I had to debate the Republican candidates.

More proof that J is a freedom-hating Nazi.

Me: ”I have to get up early this week. Richelle, Dee, and I are going to start running in Shandon in the mornings.”

J: “Why in Shandon? That seems out of the way for all three of you.”

Me: “A naked man has been spotted there several times. Apparently he drives around naked in a silver Honda, sees women running, and jumps out whacking his wiener at them.”

Me: “Hell yeah. I’ve been wanting to taser someone. Dee wants to film it, and, well, Richelle says she wants use a baseball bat on his knees, but I think running with a bat would be too cumbersome.”

Me: “Besides, she might scare him off if he spots the bat.”

Me: “Of course, if he has a newish Honda, we may joyride in it first.”

Me: “Yeah, what’s he going to do? Call the cops? ‘Oh Officers, I wagged my wiener at them all naked and shit, they knee-capped me, tasered me, took pictures, and then stole my car?’ I think not.” laughs  “Oh, and I guess we should probably bring some Clorox wipes. We don’t want to be sitting in nasty perv nutsack sweat. And God only knows what would be on the steering wheel.” *shivers*

Now here’s a rendering of how we imagine it will go down: 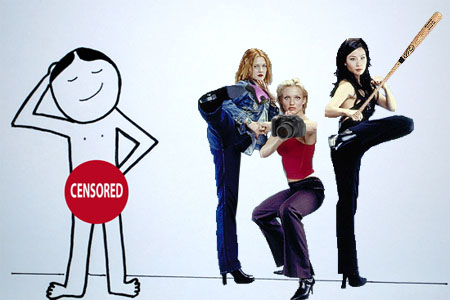 Yes, it is pure HELL running in heels.

70 Responses to More proof that J is a freedom-hating Nazi.