Warning: Creating default object from empty value in /home/jimstant/public_html/fetchmyflyingmonkeys/wp-content/themes/platformpro/admin/class.options.metapanel.php on line 49
 The Dinosaur Diaries: Entry Four | Fetch My Flying Monkeys
Everyone needs a fleet of flying monkeys to rip the stuffing out of the annoying people in their lives
— Laura
I think I have post-traumatic stress disorder now, or maybe it’s just indigestion. When I reflect back on my time in the military I am shocked I was never promoted to Commanding General, or “accidently” shot in the back of the head by friendly fire on the range.

This incident involving one of my dinosaurs occurred yesterday evening around 6:12 p.m. The following is an accurate account of the incident to the best of my recollection.

I was on the couch in the den watching bad reality television, the cats were on two separate chairs licking their butts, and Jack was on the floor chewing his rawhide chewy. I got up to get a bottle of water in the kitchen and upon my return I saw that my T-Rex was on the floor! I immediately ran to my fallen T-Rex, mentally making note that Jack was nowhere around so odds were my T-Rex would be alright. I put him back on the entertainment center shelf and turned to yell at the cats, figuring one of them threw him down when I noticed something. 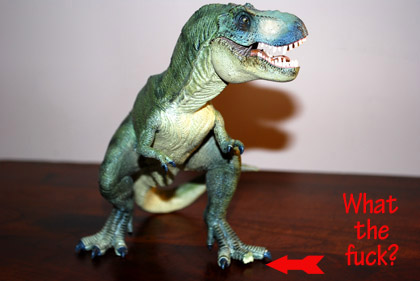 I was all “Holy shit, I wasn’t out of the room more than five minutes!” How could this be? Maybe it’s diabetes. 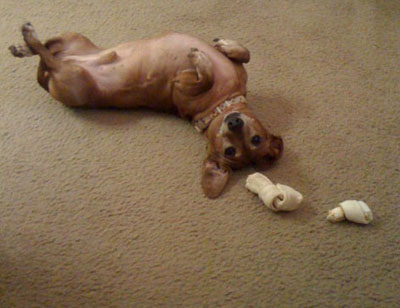