Warning: Creating default object from empty value in /home/jimstant/public_html/fetchmyflyingmonkeys/wp-content/themes/platformpro/admin/class.options.metapanel.php on line 49
 I’m still partying like it’s 1999, but my liver feels like it’s 2030. | Fetch My Flying Monkeys
Everyone needs a fleet of flying monkeys to rip the stuffing out of the annoying people in their lives
— Laura
Mistaken Identity. Now comes the worst part of the new year, when you have to sober up to go back to work. 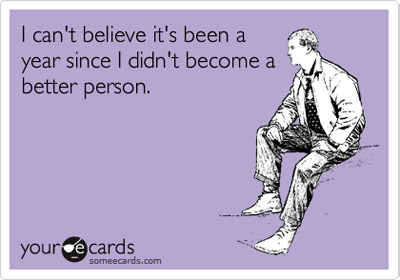 I don’t know about y’all, but 2011 can kiss my ass. I mean, seriously, it can kiss my ass. The piss-poor economy aside, this year has been a bitter disappointment. We still don’t have any killer robots or flying cars and there’s still no miracle weight-loss pill you can take before bedtime and lose 20 pounds by morning. George Clooney finally dumped his Italian WHORE and then took up with a wrestling SKANK. It’s still illegal to punch a bitch in the throat, no matter how much they deserve it, and I still don’t have a baby goat. It’s like I’m living in an age where I can’t reach my full potential. I think I must have been sent back in time, kind of like Bruce Willis was in 12 Monkeys, except they forgot about me and the whole fucking entire place is filled with insane Brad Pitts minus the cool zoo animals. That would mean I came from the future where a plague has wiped out most of the population and I’m on a work release from prison, which sounds about right. I think I miss that place. People get on my nerves. That’s probably why I failed so miserably at my mission to save the future world and they abandoned me here. I don’t even know what the fuck I’m saying. I’m drinking limoncello out of a chipped coffee mug. It’s probably something I learned in prison.