Warning: Creating default object from empty value in /home/jimstant/public_html/fetchmyflyingmonkeys/wp-content/themes/platformpro/admin/class.options.metapanel.php on line 49
 I swear to God it’s like my employer negotiated with a mobile meth lab for our health care benefits. | Fetch My Flying Monkeys
Everyone needs a fleet of flying monkeys to rip the stuffing out of the annoying people in their lives
— Laura
Alexander Skarsgård wrote me a love note, y’all! Pillow Fight

I swear to God it’s like my employer negotiated with a mobile meth lab for our health care benefits.

My eye rabies has almost completely disappeared so I decided to get an eye exam and get a new pair of glasses since my last ones were eaten by my dog Jack. I didn’t go to my regular eye doctor because he doesn’t take my vision insurance, which isn’t insurance so much as a discount card; a really bad discount card. I didn’t particularly care for the place, or the doctor. He looked like a heroin addict and was in desperate need of a good hair conditioner, but I suffered through and when it was over I was left with dilated pupils trying to find my car by feel in the parking lot. I may or may not have tried to insert my car keys into an old man’s ass at one point. I’m not sure. Anyway, my glasses will be in in 2 weeks because apparently my “insurance” only pays for a lab in some remote Mongolian village only accessible via horseback. My pupils are still dilated and I still can’t see very well and I only pray the heroin addict put the correct drops in. But look at me, blogging anyway because I’m a damn martyr and I wanted to show you what I won over at Sugar Free Thoughts: 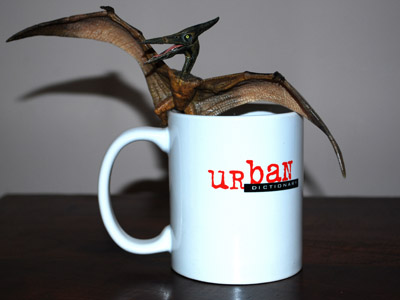 I don't even want to know what that Pteranodon is doing to the edge of the mug. I put it through the dishwasher twice just to be on the safe side.

Heather got her word published in the Urban Dictionary and held a mug giveaway. I won because I’m a winner and apparently wangworthy. I now have proof. 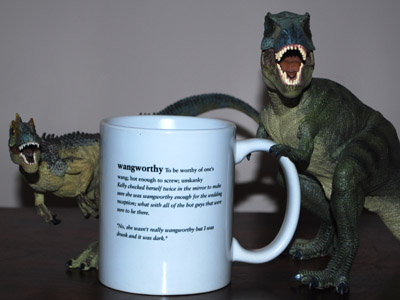 wangworthy To be worthy of one’s wang; hot enough to screw: unskanky
Kelly checked herself twice in the mirror  to make sure she was wangworthy enough for the wedding reception; what with all of the hot guys that were sure to be there.

“No, she wasn’t really wangworthy but I was drunk and it was dark.”

71 Responses to I swear to God it’s like my employer negotiated with a mobile meth lab for our health care benefits.