Warning: Creating default object from empty value in /home/jimstant/public_html/fetchmyflyingmonkeys/wp-content/themes/platformpro/admin/class.options.metapanel.php on line 49
 The Dinosaur Diaries: Entry Three. | Fetch My Flying Monkeys
Everyone needs a fleet of flying monkeys to rip the stuffing out of the annoying people in their lives
— Laura
The End Is Near! THIS is why I should never be put in charge of promoting myself. 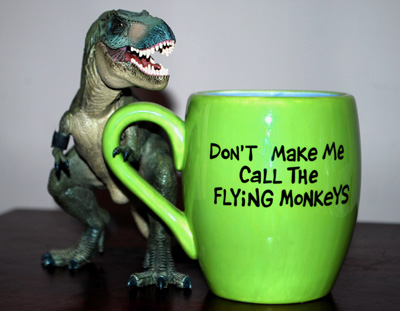 This incident involving my dinosaurs occurred Monday evening. The following is an accurate account of the incident to the best of my recollection.

One of my friends “just happened to be in the neighborhood and decided to stop in to say hello.” After a few minutes of pleasantries the conversation suddenly turned.

“Can I borrow it for a couple of days? My son is doing a report for school on T-Rexes tomorrow and it would be cool if he had a visual aid.”

“No. My dinosaurs don’t leave the house.”

“How about I bring it back the same day?”

“If anything happens to it, I’ll replace it. I swear.”

“How long have you known about this report?”

“A couple of weeks.”

“That was plenty of time to have ordered one for him.”

“We still on for Red Lobster on Sunday?”

P.S. Yes, the T-Rex is wearing a black armband. He is still mourning the murder of his friend, Pachycephalosaurus. Jack was the leading suspect in the crime but was never prosecuted. Lucky little fucker.

P.P.S. Patti from Good Googledy Moogledies went to India and saw, amongst other things, goats. She sent me pictures. Here’s one now: 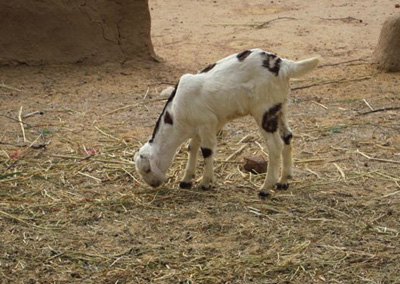