Warning: Creating default object from empty value in /home/jimstant/public_html/fetchmyflyingmonkeys/wp-content/themes/platformpro/admin/class.options.metapanel.php on line 49
 It’s surprising just how much mayhem and rabies and murder there is in my life. Well, okay, maybe it’s not too surprising. | Fetch My Flying Monkeys
Everyone needs a fleet of flying monkeys to rip the stuffing out of the annoying people in their lives
— Laura
When I go on vacation I always find it fun to pretend I’m someone else. This time I decided to be the Queen instead of my usual, Lizzie Borden. When J and I talk about world events I notice that a little vein pops out on the side of his head. I don’t know what that’s all about, but he really should get that looked at.

It’s surprising just how much mayhem and rabies and murder there is in my life. Well, okay, maybe it’s not too surprising.

Yesterday I let my dog Jack out the back door into the yard. Instantly he spotted a squirrel and took off like a bullet after it. The squirrel quickly ran up the fence and then instead of jumping down the other side, turned and chattered its disdain. Jack, being a mini-doxie with two inch legs, stood beneath him and barked. I thought it was odd that a squirrel would stand it’s ground when it wasn’t spring and babies weren’t an issue, so of course the first thing I thought was RABIES. I don’t know if squirrels even get rabies. I mean you never hear of people being attacked by rabid squirrels, but it was acting like a crazy ass so I called Jack back in, which basically means I told him he was getting a “treat” because that’s the only incentive that drives Jack to do anything I ask of him. During this excitement my outside cat Tinks was sitting in her bed watching through the screen on the back porch. She looked pretty bored with the whole situation as Jack and I walked back in the house. About an hour later I went outside and as I stepped off of the stairs I almost stepped in murder. 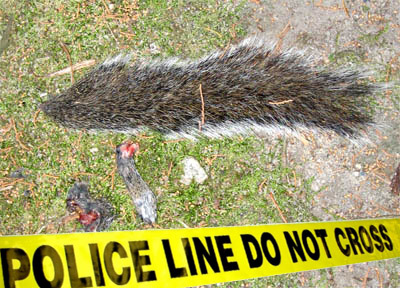 Forensic Stick Science surmised it was a tail, a foot, and an unidentifiable patch of the crazy ass squirrel.

This is not the first time Tinks has killed for Jack. You may remember a while back a mockingbird was dive-bombing him and later I found what I assumed was the same bird murdered and set on the steps.

Now what has me worried is Jack likes to bark at the mailman. The mailman just scowls at Jack like the mean old grouchy bastard he is. If Tinks sees this I’m afraid one day I’ll look out my window and see the postal van overturned and a foot in a black orthopedic shoe on my porch. I am not going to take the fall for that. 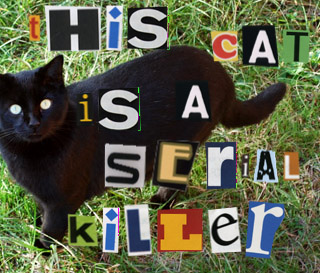 42 Responses to It’s surprising just how much mayhem and rabies and murder there is in my life. Well, okay, maybe it’s not too surprising.