Warning: Creating default object from empty value in /home/jimstant/public_html/fetchmyflyingmonkeys/wp-content/themes/platformpro/admin/class.options.metapanel.php on line 49
 I’m an environmentalist and didn’t even know it. | Fetch My Flying Monkeys
Everyone needs a fleet of flying monkeys to rip the stuffing out of the annoying people in their lives
— Laura
Jack got an early Christmas present because he’s been good this year, well not really, but at least he hasn’t stolen my credit card and maxed it out on booze and whores. Yet. Sometimes I’m torn between wanting to smother him with love or with a pillow as he sleeps.

I’m an environmentalist and didn’t even know it. 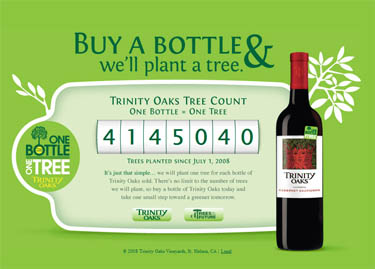 I use a lot of wine when cooking and let’s face it, once a bottle is open it’s best to finish it, so I do. Of course I use wine in almost everything and sometimes I wake up on the kitchen floor to the shrill sound of smoke alarms, but all good cooks do. They just don’t show that on the Food Network.

Anyway, I think there’s a whole forest planted somewhere in my name. I’m like Johnny Fucking Appleseed or something. Yeah. I am an environmentalist extraordinaire. And just imagine if the Circus Peanut people took a cue from these folks and offered to, say, save a dolphin for every bag eaten. Hell, I’d win the Nobel Prize for single-handedly saving the planet and I’d accept it then later sell it on Ebay to support my “cooking” addiction because that’s what all Nobel Prize winners do. They just don’t show that on the Discovery Channel.

Now here’s a drawing I rendered for you all simply because my Sharpies were sitting nearby: 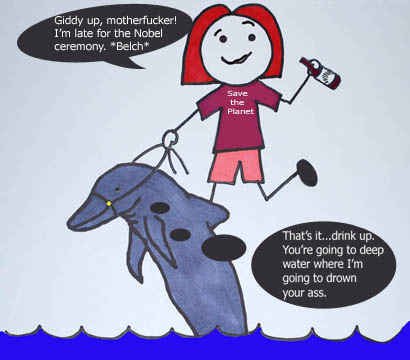 I call it “The Danger of Environmentalism” or “Dolphins Are Murderous Assholes.” Always remember, don’t cook and ride dolphins.

40 Responses to I’m an environmentalist and didn’t even know it.