Warning: Creating default object from empty value in /home/jimstant/public_html/fetchmyflyingmonkeys/wp-content/themes/platformpro/admin/class.options.metapanel.php on line 49
 Just when you thought my Stab Lists couldn’t get any better, what do I do? Add action pics and more cursing that’s what! | Fetch My Flying Monkeys
Everyone needs a fleet of flying monkeys to rip the stuffing out of the annoying people in their lives
— Laura
For someone who is on my Stab List every other week, what the hell was he thinking? I think the ski mask I found in her litterbox was my first clue

Just when you thought my Stab Lists couldn’t get any better, what do I do? Add action pics and more cursing that’s what!

Being off work a few days, getting a shit load of gifts and celebrating the birth of the Baby Jesus has not slowed down the collection of people and things I want to stab. So let’s get to it, shall we?

1. Umar Farouk Abdulmutallab. The piece of shit who attempted to blow up a Detroit-bound plane on Christmas Day. Fuck you. I’d like to stab you so hard. Stab you with all my Christmas present knives until I broke every blade off in you. Now, all I can wish for is that you suffer until you are executed.

2. The weather on Christmas Day. It rained ALL day and not just a sprinkle, but an absolute downpour. We were out in it driving to and from J’s parent’s house. We went 4o mph the whole way on the highway. 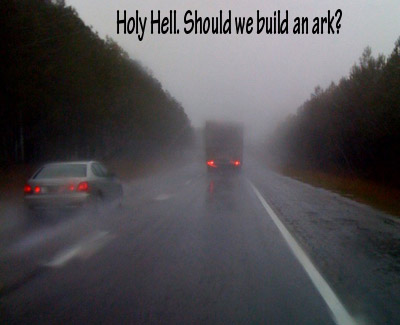 3. The thermostat at J’s parent’s house. Oh. My. Fucking. God. It was 80 degrees in there AND they had a fire going in the fireplace! They are older folks of course, and they stay cold. Unwrapping my presents caused beads of sweat to start rolling down my head and neck. I passed out, but came to before anyone noticed. Good news is I lost 6 pounds. Bad news is I gained it back after I re-hydrated. Next year I’m wearing a halter top and shorts and bringing my own fan.

4. The hospital I was treated at last month whose very first bill they sent me after my insurance processed threatened me with collections! Yes, the FIRST bill I received from them. STAB.

5. J for saying that I had deleted important blog files off of my computer WHEN I DIDN’T. And if they were so important why didn’t YOU make back-ups, Mr. IT person? Watch out. You armed me, remember?

6. This truck driver. I couldn’t believe it so I held up my iPhone and snapped a pic. The lane on the left is a turn lane. Stupid non-driving bastard. 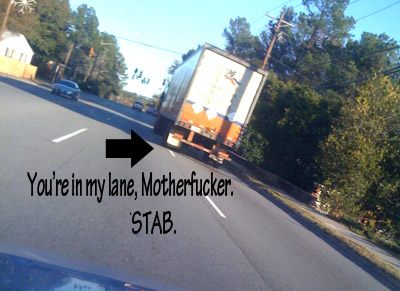 15 Responses to Just when you thought my Stab Lists couldn’t get any better, what do I do? Add action pics and more cursing that’s what!