Warning: Creating default object from empty value in /home/jimstant/public_html/fetchmyflyingmonkeys/wp-content/themes/platformpro/admin/class.options.metapanel.php on line 49
 Regrets, I’ve had a few; but you’re not one of them GEORGE CLOONEY | Fetch My Flying Monkeys
Everyone needs a fleet of flying monkeys to rip the stuffing out of the annoying people in their lives
— Laura
I’m like a white Oprah Defending my love

Regrets, I’ve had a few; but you’re not one of them GEORGE CLOONEY 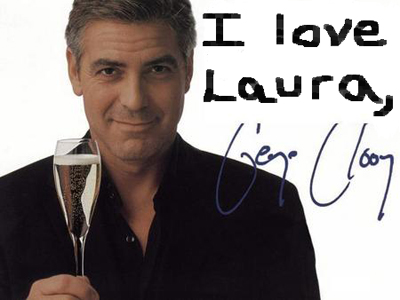 1. George Clooney never contacted me. I write about him here on my blog in hopes he’ll google himself and realize just by my words that he desperately needs me in his life. It never happened. I won’t give up though. CALL ME, GEORGE CLOONEY.

2. I never actually punched anybody in the throat this year and it’s one of my favorite things to say. That, and “CALL ME, GEORGE CLOONEY.”

3. Another year has passed and there still are NO KILLER ROBOTS available to the general public. This really pisses me off. But I haven’t given up hope. I have though changed my mind on my robot’s name. Instead of Bill, I will name him GEORGE CLOONEY.

4. J refused plastic surgery to make him look like GEORGE CLOONEY. God, I ask for ONE FREAKIN’ TINY FAVOR. I’d like to punch him in the throat; J, not you GEORGE CLOONEY.

5. I didn’t win the lottery. Of course I would have used all the winnings to pay off the judge and have the restraining order lifted so that GEORGE CLOONEY and I could finally be together.

6. My acting career never took off this year. Of course I put absolutely no effort towards it at all, but that’s beside the point. It was my dream to co-star with GEORGE CLOONEY and have the stereotypical leading man/co-star love affair. I am not without acting experience. I got rave reviews on my performance in a play once. The nuns said they had never seen a better tree.

7. I never moved to California. I really wanted to be closer to THE PACIFIC OCEAN. Yeah, I bet you thought I was going to say GEORGE CLOONEY. Loser.

14 Responses to Regrets, I’ve had a few; but you’re not one of them GEORGE CLOONEY