Warning: Creating default object from empty value in /home/jimstant/public_html/fetchmyflyingmonkeys/wp-content/themes/platformpro/admin/class.options.metapanel.php on line 49
 Photo Challenge- Scary Christmas Decorations | Fetch My Flying Monkeys
Everyone needs a fleet of flying monkeys to rip the stuffing out of the annoying people in their lives
— Laura
Going green Brokeback Broyhill

I haven’t decorated for Christmas yet and I doubt I will this year. It’s not that I don’t feel festive; it’s purely out of laziness. I embrace my laziness. As a matter of fact, I celebrate my laziness daily in many ways. I will nap after work. I will toss things in closets and drawers and spare rooms instead of putting them in their proper places. I will leave dishes in the sink until, well, I simply can’t leave them anymore. And if there’s a shortcut at home, I will take it.

So, in the spirit of laziness I took this week’s photo challenge photos while on my daily lunch walk with my iPhone instead of my regular camera. The challenge was to take a picture of some kind of scary Christmas decoration. I took two so I hope I get extra points whatever that’s worth. Hopefully it’s for free maid service.

This one I title “That’ll Do Pig. That’ll Do.” Or maybe, “You Can Put a Bow on a Pig, But You Still Have a Pig.” It really speaks for itself. 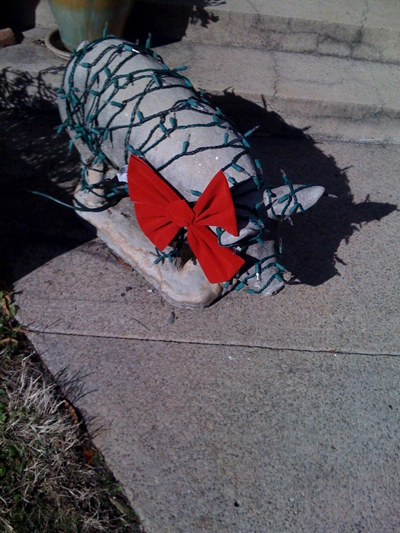 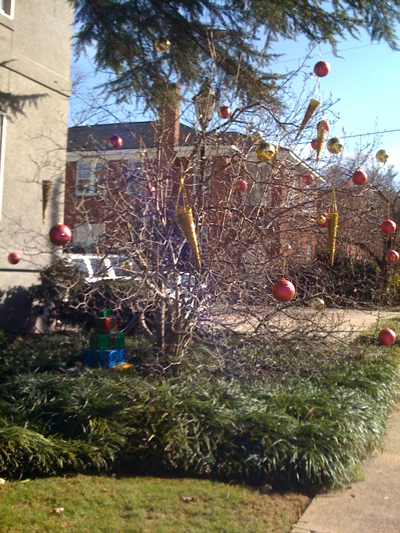 Those are large glass ornaments on a bare tree of some sort and a fake gift under it in the back there. I’m actually surprised those ornaments have been on there for a week now. If I was a kid in that hood I would have raided that tree by now and would have already been either sutured up from injuring myself from gathering and throwing them at people or from being caught by the people I threw them at. Either way it would have ended with a trip to the ER.