I haven’t really been watching the Olympics. I find most of it boring. Oh, and I hate China. Yeah, I guess that makes me a racist, and definately not PC, but so be it. And although I find the games boring, I love me some scandals. Here’s a picture of a few of the ”WOMEN” that are on China’s Women’s Gymnastic Team. 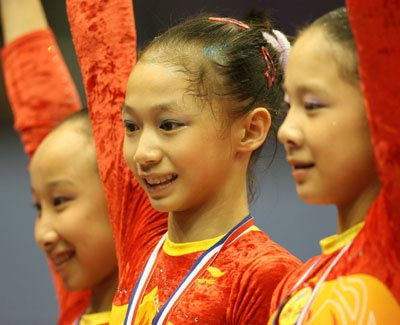 Yeah, they’re 16 years old. NOT. I know China probably has a shortage of girls since they like to kill them as infants or sell them and all, but give me a fucking break. If we can make up ages during this Olympic season, I’m personally going to go with 25. It’s just about as believable. This isn’t sore loser stuff. The USA Women’s Team kind of fell and stumbled around out there, but Jesus Christ on balance beam, there’s a reason there’s an age limit. Little kids have the flexibility of monkeys, and the energy of the same simians on speed. Cheaters.

Oh, another China Olympic scandal was the Milli Vanilli little girl that sang at the opening ceremonies. I personally did not watch the opening ceremonies. I started to, but their music made me a nervous wreck. It reminded me too much of me trying to pull a sauce pan out of my cluttered cabinets. Anyway, they had some smiling zombie Disney anime ”cute” kid lipsyncing a song because the actual child that could sing was considered unattractive. Yeah, that’s real nice. 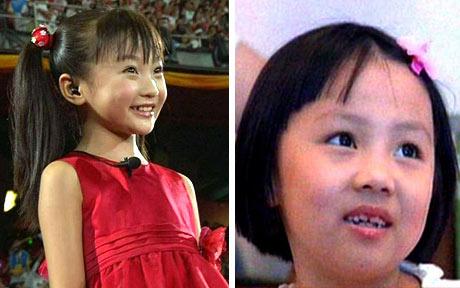 How much you want to bet lil smiling Egg Foo Young ends up a concubine to some rich rice baron in a few years and poor lil fugly Chop Suey will be in a factory next week assembling some lead paint based toy bound for WalMart during the day and prostituting at night wishing her momma had taken a coat hanger to her when she was a fetus?

3 Responses to Made in China