Warning: Creating default object from empty value in /home/jimstant/public_html/fetchmyflyingmonkeys/wp-content/themes/platformpro/admin/class.options.metapanel.php on line 49
 Marauding chickens and a sociopath donkey | Fetch My Flying Monkeys
Everyone needs a fleet of flying monkeys to rip the stuffing out of the annoying people in their lives
— Laura
For Beth Rachael Ray ain’t got nothing on me

Marauding chickens and a sociopath donkey

J and I were driving down a country road this weekend when I spotted the cutest little donkey in a field with a few goats. I yelled “STOP!” and J slammed on the brakes and looked at me. I said “I want to get a picture of that cute donkey!” And smiled the sweetest smile. He rolled his eyes and pulled into a small dirt road beside the field that held the critters. 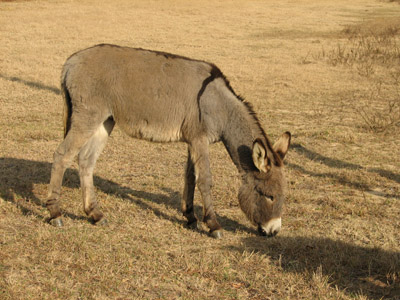 I got out of the car and started taking pictures. Then the donkey and the goats spotted me and started running over. The donkey kicked the living shit out of a few goats, but I failed to get that on film because I was too busy grimacing. 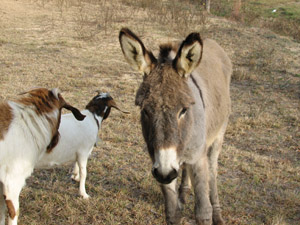 They were real interested in me mostly because they thought I had food, so I snapped a few more pics while J sat in the car and ducked down everytime a car passed, not because we were trespassing, but because of embarassment. He played it cool though, and pretended he dropped something on the floor everytime a car went by. I continued snapping pics because, well, I have no shame. 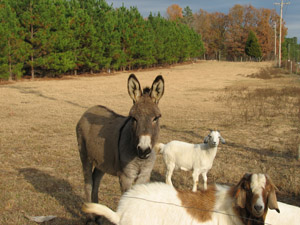 Eventually the donkey and the goats lost interest in me once they figured out I was the bearer of no gifts. I continued snapping pictures, when movement caught my eye towards the woods. That’s when I spotted them. A murderous pack flock of chickens heading straight for me.

For some reason this gave me the creeps. My first thought was that there might be a fighting rooster in there and it would spur the shit out of me. They kept coming with a determined blood thirsty look about them. I started to back up towards the car, still taking pictures.They rushed up just as I decided it was a good time to leave, because I knew the electric fence around the other livestock meant nothing to them. Hell hath no fury like a territorial chicken. 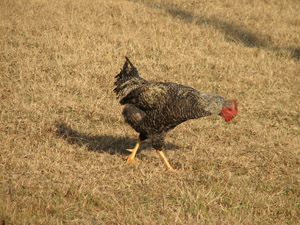 After we left I asked J if we could stop at a little country store that I saw had a ‘feed corn for sale’ sign in the window. He asked if I was thirsty as he started applying the brakes. I said no, I wanted to get some feed corn and keep it  in his car for when we spot livestock I want to take pictures of. He looked at me and accelerated. I took that as a “no”. 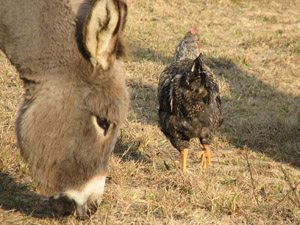 One Response to Marauding chickens and a sociopath donkey