Warning: Creating default object from empty value in /home/jimstant/public_html/fetchmyflyingmonkeys/wp-content/themes/platformpro/admin/class.options.metapanel.php on line 49
 Giving thanks | Fetch My Flying Monkeys
Everyone needs a fleet of flying monkeys to rip the stuffing out of the annoying people in their lives
— Laura
Circling catalogs the modern way Thar he blows! 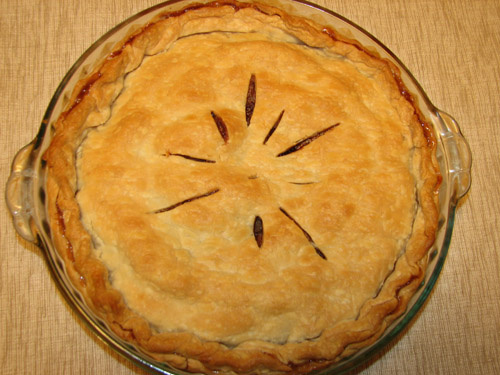 The thing I am most thankful for this holiday season I suppose is that I am still alive. I got sick last weekend and it just went downhill from there. The doctor told me I had bronchitis and gave me a bunch of drugs. Since I was too busy trying to cough up both my lungs, I missed Thanksgiving dinner at J’s parents. Instead I stayed home watching movies on Netflix and going through three boxes of Klennex. The kind with the lotion in it, cause I’m sensitive like that.

My friend Duane called me and said that it was probably karma coming back kicking my ass. That I was probably recently really bitchy to someone, and this was my payback. I told him I really doubted it because if bitchiness counted in the karma scheme of things I would have been dead many, many years ago.

The above picture is an apple pie I made. I was going to make it for Thanksgiving dinner, but just made it today before the apples could start rotting. I think I’ll freeze it until I’m able to taste it. Maybe by Christmas.