Warning: Creating default object from empty value in /home/jimstant/public_html/fetchmyflyingmonkeys/wp-content/themes/platformpro/admin/class.options.metapanel.php on line 49
 On being spoon fed | Fetch My Flying Monkeys
Everyone needs a fleet of flying monkeys to rip the stuffing out of the annoying people in their lives
— Laura
Something boring this way comes Touched by crap

On being spoon fed 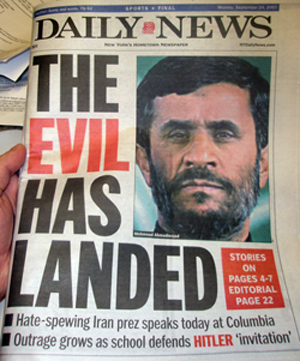 Normally I keep my political opinions to myself. Well, okay I lie, what I meant to say is, I only discuss them with close friends. I am by no means an expert on politics, but I do consider myself a sensible, semi intelligent person, and I keep up with current events and most importantly, I do try to take what is fed to the public with a HUGE grain of salt, okay, a boulder that could fill the Grand Canyon.

As everyone must know by now, Iranian President Mahmoud Ahmadinejad has been visiting the United States and has been met with a lot of protest from the American public. I read an article this afternoon about his visit to Columbia University today and the accusations made by the president of Columbia University. The guy basically called President Mahmoud Ahmadinejad a petty and cruel dictator and also accused the Iranian president of denying the Holocaust ever happened, and that the Iranian president also previously stated that Israel should be wiped off the map, and that Iran was supplying weapons to Iraq insurgents, and of course developing nukes to start a war with the United States, and basically he was Satan on earth.

The Iranian president responded by saying “I should not begin by being affected by this unfriendly treatment.” Then went on to say that his country was not intending war on anyone, and as far as the holocaust he said “Granted this happened, what does it have to do with the Palestinian people?” Meaning, why should the Holocaust be a reason for the strife between Israel and Palestine? And I must say, I agree with him. The holocaust was NAZI GERMANY trying to annilate the Jews. Hmm… just like the Taliban was responsible for the 9-11 attack, NOT Iraq. And, it seems to me that we are being spoon fed the same stuff about the Iranian president as we were about Saddam Hussein (*cough*weapons of mass destruction*cough*).

First, I am disappointed that at a place of higher learning that that kind of “questioning” occured. I thought colleges were a place of open mindedness, and discussion. The Iranian president is here to discuss his and his country’s views on all subject matters concerning relations with the United States. Why can’t we see that people in this world have different views then ours? That people have different governments, with different laws. Are we the dictators police of the world? And better yet, why can’t we take an opportunity to hear it from “the horse’s mouth” instead of what is fed to us by Bush and his league of warmongers our elected officials and media?

I am not a fan by any means of Iran, or any middle eastern country for that matter. Oh, a funny story, I remember the first Iranian I ever met. It was at Morehead State University in Kentucky in the late 70′s or early 80′s. A small college in rural Kentucky. I was smoking some weed discussing college life with a group of friends and there was a guy with dark skin and an accent. I asked him where he was from. He said “Iran”. I said, ” I didn’t ask how you got here.” Everyone laughed, except him. True story. Okay, I digressed a tad to tell my funny. All I am trying to say is I get scared when we start making villians out of entire countries. I think it shows our ignorance and arrogance. The last thing we need is another Iraq. More 18 year olds dying everyday. Billions of dollars spent. The guy came here for discussion. Even if he’s here lying his ass off, the least we should do is listen, and mind our manners. Remember, hold your friends close and your enemies even closer.

Now that that’s off my chest, I must now get my evening chores done so that I can veg on my couch to watch tonight’s HEROES PREMIER!!

12 Responses to On being spoon fed