Warning: Creating default object from empty value in /home/jimstant/public_html/fetchmyflyingmonkeys/wp-content/themes/platformpro/admin/class.options.metapanel.php on line 49
 Not wanting to become muscle bound | Fetch My Flying Monkeys
Everyone needs a fleet of flying monkeys to rip the stuffing out of the annoying people in their lives
— Laura
Poor little rich girl I’m the new match dot com

Not wanting to become muscle bound

I have a fantastic runner’s treadmill that I had recieved for Christmas that sits in the middle of my living room. Well, it’s not actually in the middle, but to the side. I had it placed there so that it would be used. Not placed in the bedroom or a spare room where I am certain it would just be used for a giant clothes hanger or storage platform. It’s right where when I plant my ass on the couch it screams at me, " Get up! Get up you lazy wench and use me!" It won’t shut up until I get up and use it. And, yes, I curse back at it a lot.

It’s turned summer here in South Carolina, and even though you run your air conditioner in your home, you still feel the mugginess in the air. I decided that I needed a fan blasting on me while using the bossy treadmill. A clip-on wouldn’t do. The ceiling fan wasn’t enough. I needed something powerful. So I got a standing fan that tilts up directly on me. It’s exercise nirvana. This fan also is remote controlled, because pushing a button manually would be too intensive of a workout. And I don’t want to bulk up with too much muscle.

Yesterday was gloomy and rainy. I wanted to go take some interesting pictures for this blog, but instead went shopping. So here’s a pic of the adorable flip flops/slippers I got  to wear around the house. These said "Hey, look girly while you avoid stepping barefooted on any squishy hacked up hairballs on the floor." Yes, everything talks to me. 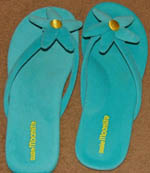 One Response to Not wanting to become muscle bound